Villain or victim? An Irishman’s Diary on Sir William Gregory and the Great Famine 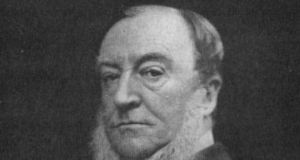 Sir William Gregory: not the villain as commonly portrayed

Recent performances by the Druid Theatre of the plays of Lady Augusta Gregory have reminded us how talented a figure she was. George Bernard Shaw once called her “the greatest living Irishwoman”.

Her husband, Sir William Gregory, is a different matter. Due to his clause in the 1847 poor relief (Ireland) act which limited relief to those holding a quarter acre or less, we are told his name “entered Irish history as a curse” (Irishman’s Diary, April 6th). A number of early and recent histories of the Famine hold him responsible for many deaths.

Serious questions, however, must be raised about this approach to Gregory. There is considerable evidence that his actions have been misunderstood and misrepresented.

By early 1847, the London government had introduced various famine relief measures such as labour schemes and food depots. By March 1847, however, it was concerned at their cost and efficiency and determined to move the operation and cost of relief to the Irish poor law unions funded by ratepayers.

A poor relief (Ireland) Bill was introduced at Westminster to establish this new system. A number of Irish MPs objected to the Bill on the grounds that the British exchequer should bear these expenses and that Irish resources were unable to bear the cost (as would prove correct).

On March 29th, 1847, William Gregory brought forward his quarter-acre clause to limit aid to those on a quarter-acre or less. His aim was to restrict relief to the most needy and to prevent costs escalating.

After debate 28 Irish MPs backed the measure while only 3 voted against it. Those in favour included Maurice O’Connell, nephew of Daniel O’Connell, JH Monahan, MP for Galway city and JJ Bodkin, MP for Galway County. This shows how few understood or expected the damaging effects of the clause.

Much criticism has been directed at Gregory over his words at this debate. It is alleged that after rejecting claims that the measure would destroy all small farmers he said that “if it could have such an effect, he did not see of what use such small farmers could possibly be”. This quote, recorded in Hansard, has been described as dismissive and contemptuous.

However, there is a strong argument that these were not his words. Today Hansard is an official publication but in this period it was privately run and often unreliable. Because of this, as a 1956 HMSO report noted, there is “no special authority attached to Hansard until after 1909”.

There is an alternative report of his speech, printed in the Times, the Freeman’s Journal and the Galway Vindicator. It records that he said: “as for this clause destroying the small farmers, of what value could their farming be if this would affect them”. He continued that he was quite willing to commence the clause with the words “from and after the 1st of November next”.

This statement is very different in content and tone from that in Hansard. Why accept this version? The sentence which follows about the clause coming into effect only in November is correct, and is contained in the Act as it appeared. Hansard omits this line which casts doubt on its validity.

What were the effects of this quarter-acre clause? Undoubtedly, it caused considerable harm, because it led to people dying rather than give up their homes to qualify or having no homes to return to after receiving aid.

Nonetheless, we should note that the effects of the clause were often ameliorated, for practical or humanitarian reasons.

A government inquiry revealed that in July 1848 a third of nearly 200,000 receiving aid in Co Mayo occupied land exceeding a quarter acre. When an official was challenged about the number receiving aid who were not entitled to it, he said simply, “I believe many of them required relief, nonetheless”.

It is often forgotten that Gregory was one of three principal backers in June 1847 in parliament behind a proposed major scheme of assisted emigration to specially purchased land in Canada. The government rejected the idea because of the cost. It was denounced strongly in Ireland as an encouragement for people to leave the country.

Nonetheless, it has been reckoned that over the next eight years up to a million people emigrated, most without help to leave or assistance when they arrived. This scheme, or an adapted form of it, could have helped greatly many thousands of people.

The misery endured by the emigrants to New Brunswick, Canada, described in the Irishman’s Diary of October 18th, might have been avoided if people had listened to Gregory and his associates,

Gregory, who later served as MP for Galway County from 1857 to 1872, died on March 6th, 1892. Not a single obituary mentioned the quarter acre clause.

William Gregory was not the villain as commonly portrayed. His quarter acre clause did have damaging consequences, but these were unintended. At the same time, his motives and the effects of the clause have been misunderstood and misrepresented.