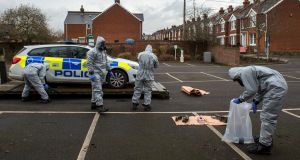 Military personnel remove a police car and other vehicles from a public car park as they continue investigations into the nerve agent attack on Sergei Skripal in Salisbury. Photograph: Chris J Ratcliffe/Getty Images

British prime minister Theresa May put two scenarios to parliament on Monday. The attack on former British-Russian spy Sergei Skripal may have been planned directly by the Kremlin or that through lax scrutiny Russia allowed the nerve agent to fall into the wrong hands. The situation is more complicated than that.

The nerve agent called Novichok is a very deadly substance, eight times more powerful than its western equivalent known as VX. There are also indications that it could have been smuggled out of the former Soviet Union as far back as 1993.

In September of 1993 as The Irish Times Moscow correspondent I obtained a list of chemical and biological weapons, including Novichok, that were being produced by Russia as the successor state to the Soviet Union. I brought these documents to the recognised expert at the time Dr Thomas Stock of the Stockholm International Peace Research Institute (SIPRI).

Dr Stock’s reaction was that Russia immediately needed western financial help to stop Novichok and other chemical and biological agents being exported illegally by criminal elements. Western help arrived eventually but was it too late. The countries of the former Soviet Union, with the exception of the Baltic nations, were in chaos at the time.

There was money to be made in those days when inflation had reached 2,500 per cent in a single year. Those who became extremely rich by selling natural resources, military equipment or anything they could get their hands on became known as the Russian oligarchs, but not all the oligarchs were Russian. The main production plant for Novichok was in Uzbekistan.

It is also possible that Novichok has since been produced illegally. It is made from chemical elements which are harmless on their own but lethal when combined.

Theresa May’s first scenario, that the Kremlin was directly involved, seems unlikely. Skripal was in the UK as part of an official spy-swap deal with Russia. The only suggestion of suspicious activities on Skripal’s part has been a report in the Daily Telegraph that he was close to an unnamed person in the organisation run by Christopher Steele, who produced the dossier claiming Russia had compromising material on Donald Trump.

For President Vladimir Putin to have launched such a vicious attack would have been counterproductive as it would jeopardise any spy swaps in the future.

There have been comparisons made with the murder of Alexander Litvinenko, poisoned with polonium in London in 2006, but this took place under very different circumstances

There have been comparisons made with the murder of Alexander Litvinenko, poisoned with polonium in London in 2006, but this took place under very different circumstances. Former Canadian ambassador to Russia and former high commissioner of Canada in London, Jeremy Kinsman, made this point clearly in a recent interview on Canadian TV.

Litvinenko was not in Britain on an official deal agreed between London and Moscow. He was also, unlike Skripal, involved in activities that were strongly disapproved of by Russia. The Kremlin had far greater reason to have Litvinenko eliminated than it had to launch an attack on Skripal, and this brings us to the oligarchs.

London has become the city of choice for those who have made vast fortunes following the fall of the Soviet Union and not all of them have been squeaky-clean model citizens. Boris Berezovsky, for example, who employed Litvinenko, had been a prime suspect in organising the murder of American journalist Paul Klebnikov. Forbes Magazine, Klebnikov’s employer, continues on its website to point the finger in Berezovsky’s direction. A former British diplomat has told me in private that giving Berezovsky asylum was considered a major mistake in UK diplomatic circles.

The anti-Putin Berezovsky died in mysterious circumstances not long after he had lost a court case against pro-Putin oligarch Roman Abramovich, owner of Chelsea FC. British police ruled that his death was suicide but there are those in Britain who believe, or want to believe, he was murdered.

The oligarchs have been welcomed in London financial circles because of the amount of their money. They have been welcomed too by May’s Conservative party, which, according to recent reports in the London Times and Daily Telegraph, has received donations of £820,000 from Russian sources. Chancellor Philip Hammond has refused to return the money because he did not want to tar the oligarchs “with Putin’s brush”.

Perhaps it is time to realise that if your country becomes a haven for dodgy people like Berezovsky then dodgy things are likely to happen.

1 Sideline Cut: Vignette shows why Bird is the true shark in The Last Dance
2 Irish tourists excluded from visiting Greece and Croatia
3 We need to pay very close attention to what is happening in Britain now
4 Taoiseach has confirmed schools will reopen at the end of August
5 Why it’s important to get back to basics and learn to walk (properly) again
Real news has value SUBSCRIBE