Anti-Semitism is on the march across Europe 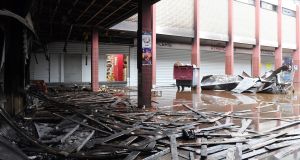 The Promo and Destock store, a French kosher grocery store in Créteil, south of Paris, after it was destroyed in an arson attack. Photograph: Alain Jocard/AFP/Getty Images

The Front National is about to depart the French political scene. When members of the far-right party gather in Lille for their annual congress today, they are expected to pass a motion to change the party’s name. It will be a personal victory for party leader Marine Le Pen, who has long argued that a facelift is vital if the party is to shed its toxic reputation and open itself up to political alliances.

The last thing Le Pen needed was for her embarrassing dad – 89-year-old Jean-Marie, the party’s founder, whom she expelled in 2015 – to re-emerge from retirement and remind everybody that toxicity is built into the party’s DNA.

In the first volume of his memoirs, published last week, the party patriarch reminded France why his daughter has been so keen to distance herself from him. Once again he defends Philippe Pétain, the leader of the collaborationist Vichy regime.

He stands by his claim that the Holocaust was a “detail of history” and that the German occupation was “not particularly inhumane”. He holds to his justification of torture in the Algerian War.

Since succeeding her father in 2011, Marine Le Pen has jettisoned much of his legacy. His Thatcherism has given way to statist, protectionist economic policies, which have allowed the party to reach beyond its traditional heartlands among southern veterans and Pieds-Noirs and into the northeastern industrial belt.

His Catholic conservatism has been moderated by her more liberal instincts, and his uncompromising Euroscepticism is in the process of being diluted somewhat (the current leadership believes its call for France to leave the euro zone put a brake on its progress in last year’s election).

Above all, however, Jean-Marie Le Pen reminds French voters of another core element of the Front National’s identity: anti-Semitism. Several key figures in the party’s early period, in the 1970s, were known anti-Semites, Nazi sympathisers and Holocaust deniers. Jean-Marie Le Pen’s early notoriety owed a lot to those comments on the Holocaust.

Under Marine Le Pen’s leadership, the party has been eager to be seen to repudiate that record. Senior figures have openly acknowledged that anti-Semitism put a hard ceiling on its support, and from the 2000s some of the party’s most vocal anti-Semites were purged or pushed to the periphery.

Today, of course, the Front National’s fear-mongering energies are focused on a different target. Marine Le Pen has tried to position herself as a friend of Israel, and in a recent interview she even argued that her party was “the best shield” against anti-Semitism, facing “the one true enemy: Islamist fundamentalism”.

When a new government is formed in Germany this month, the far-right Alternative für Deutschland will become leader of the opposition. It carries a legacy of anti-Semitism; last autumn one of its candidates said Germany should take pride in what its soldiers achieved in the second World War. Official figures show reported anti-Semitic crimes are rising, and almost 93 per cent of those are linked to far-right extremism.

In Poland, where the nationalist Law and Justice party recently enacted a law making it illegal to speak of Polish complicity in the Holocaust, prime minister Mateusz Morawiecki last month found himself having to deny being a Holocaust denier after apparently suggesting that Jews were partly responsible for it. Jewish organisations in Poland have recently reported being flooded with hate mail.

As xenophobic parties have seen their support surge from Austria to the Czech Republic and Italy, so too has anti-Semitic demagoguery.

In Hungary, authoritarian prime minister Viktor Orbán has proclaimed zero tolerance for anti-Semitism, but many see anti-Jewish messaging in the government’s campaign against George Soros – the elderly Hungarian Jew who emigrated to the US after the second World War, made a fortune and has long been involved in promoting liberal democratic values in eastern Europe.

Last summer, billboards went up across Hungary depicting Soros grinning contentedly against a blue background with the inscription: “Don’t let George Soros have the last laugh.”

The campaign uses “imagery that evokes memories of the Nazi posters during the second World War showing ‘the Laughing Jew’,” according to Human Rights Watch. “The campaign encourages anti-Semitism.”

Much of the evidence is similarly suggestive rather than explicit. When far-right parties rail against “globalism” and its supposed sponsors among the rootless cosmopolitan elite, for example, it’s hard not to hear the echoes of old anti-Semitic tropes.

In some instances, though, there’s nothing subtle about it. “Jews will not replace us,” chanted the white nationalists whose march through Charlottesville, Virginia, last year drew only tortured equivocation from the White House.