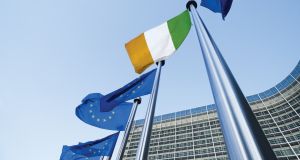 Brexit has also changed the calculation for Ireland by increasing the importance of attempts to demonstrate Irish commitment to the EU in all its aspects. Photograph: iStock/Getty

The trouble with the concept of “neutrality” as an expression of a fundamental Irish foreign policy values is that it is loaded with contested political meaning and historical resonances above and beyond the simple desire to remain militarily non-aligned.

Some of its subtext clearly resonates with national aspirations, notably a desire not to be complicit in great power or neo-imperialist military adventures. Or indeed in nuclear-deterrence-based alliances.

Other parts of the “neutrality” subtext are more challenging.

It does not mean eschewing the use of force as a foreign policy tool – our obligations to supporting UN-mandated missions arising from membership make that clear. Nor does it mean – and never did – political neutrality between the democratic nations of the EU and authoritarian regimes in places like Russia, Turkey or further afield. Or neutrality in the “war on terrorism”.

And crucially it does not preclude military engagement with partners in peacekeeping or the fight against terrorism, cyber warfare, or people smuggling. The term “neutrality” has been taken by governments in recent years to mean pretty much anything short of a commitment to mutual defence guarantees.

What we are not prepared to say is that we will automatically come to the defence of fellow EU member states (mutual defence) although we are willing to do so once we have obtained the Dail’s permission.

And although the Treaty on European Union expressed at least an aspiration to “mutual defence” it qualifies it in Article 42, guaranteeing that the EU “shall not prejudice the specific character of the security and defence policy of certain Member States” (ie neutral states ).

Seeking some clarity on the term – a “redefinition” not a rejection of the concept – Fine Gael’s MEPs on Friday launched a timely, and given the toxicity of the issue, brave, policy paper* looking also for greater Irish engagement in the emerging European Defence Union.

And former TCD lecturer Patrick Keatinge poses some of the same questions, specifically in the context of Brexit, in a new paper for the IIEA**.

The MEPs strongly endorse the recent signing up by Ireland, with 24 other member states, to Pesco, a framework of projects for co-operation between member-state militaries. Ireland is involved in five of the original 17 projects.

However, there are strong critics of the Government’s Pesco decision in the pro-neutrality lobby. They worry that it involves the inevitable incorporation of national forces into a “European Army” under Brussels control, or into a “common defence”, in the form of a mutual defence pact. And they can point to some support for such ends in the current president of the commission, Jean Claude Juncker, among others.

However, Keatinge insists, it is very far from being a European Army. “A mature form of Pesco would be a necessary but not sufficient condition for a future common defence. That would require further treaty change and, for Ireland, a referendum.”

And, of course, Brexit has also changed the calculation for Ireland by increasing the importance of attempts to demonstrate Irish commitment to the EU in all its aspects.

“ Much of the debate,” the MEPs argue, is characterised by outdated language and “the term ‘independent non-nuclear defence’ might be a better way of describing our position”.

In doing so Ireland would be following fellow neutrals Finland and Sweden. Although not yet in Nato, Finland is increasingly engaged and informally aligned with it. From accession to the EU in 1995, a consensus emerged there, later to follow in Sweden, that membership was not logically compatible with the traditional notion of “neutrality”.

The national doctrine – often described as a “policy of neutrality” or “aimed at neutrality”, rather than pure neutrality – became one of “military nonalignment”, which has since been stripped of any ideological connotation and is adverted to now simply by the descriptive formula “does not belong to any military alliance”.

“We want to make it clear that we do not support the creation of an EU army,” the Irish MEPs argue. “However, Ireland can do so much more in collaboration with our EU partners in the area of security and defence.”

Pesco, Keatinge observes, “reflects the fact that defence is now high on the agenda as the EU adapts to a future without the United Kingdom as a Member State.”

Pesco involvement, however, it “is not cost-free, even if projects attract support from the Commission’s new European Defence Fund. Ireland’s national defence expenditure is in any case likely to rise, from a very low and arguably unsustainable base.” Ireland’s current spending on defence at 0.3 per cent of GDP is the lowest in the EU.

The MEPs argue that in line with a general Pesco commitment made by all member states to raise their defence spending towards Nato’s target of 2 per cent, Ireland needs to substantially expand its military’s capabilities.

They also make a strong case for a review of Ireland’s so-called “triple lock” – the requirement that any decision to send troops abroad must be approved by the Dáil, the Government, and the UN.

Politicians have been terrified to open discussions like these, but a considered review of what we mean by neutrality in 2018 does not need to call into question what we regard as important in it. It could help to clarify, not least for many of our bewildered EU allies, that we have an internationalist perspective, and a strong moral commitment to collective security in our union.