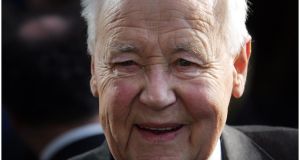 John Gerard Buchanan: prior to his appointment as a judge and during his career as a barrister he stood as a candidate for Fianna Fáil in the Dublin South Central constituency in 1966 and 1973. Photograph: Bryan O’Brien

His 1996 report into the payments to the former taoiseach formed the basis for the subsequent formal sworn public tribunals chaired by Mr Justice Brian McCracken and Justice Michael Moriarty.

His appointment followed media reports about financial transactions and payments to both Haughey and members of his family. The job entrusted to Buchanan was simple: trawl through a Price Waterhouse report commissioned by Dunnes Stores on “irregular payments” made to politicians, public servants and their families by Ben Dunne; establish if the money was received by the named individuals and for what purpose; and report to the Dáil.

His report – which many at the time criticised as lacking substance – proved to be a mouse that roared by uncovering enough information to support the establishment of a sworn public tribunal.

Buchanan retired in August 1996 as acting president of the Circuit Court. He was appointed to the bench in 1978 and on his retirement was, along with Judge Diarmuid Sheridan, the longest-serving judge in the Circuit Court.

Dunnes The following December, he was appointed by the Committee on Procedure and Privileges of the Oireachtas to look at the Dunnes

payments. Following receipt of his interim report, the Dáil and Seanad decided to set up the McCracken tribunal in February 1997.

John Gerard Buchanan was born on August 27th, 1926, to Hugh and Gladys (nee Gilmore). The Buchanans were originally from Co Tyrone and his father was the manager of the Northern Bank branch on the South Circular Road. Gerry – as he was known – spent much of early life on the South Circular Road, and later Victoria Road (Rathgar) and was educated at Sanford Park, St Columba’s College, TCD and the Kings Inn.

He was called to the bar in 1949 and took silk in 1973. He practised both in the Dublin Bar and the Midlands circuit. His work as a barrister was often as prosecuting counsel on behalf of the State in criminal or subversive trials.

During his time as as a public prosecutor he worked closely with the Garda Síochána and was well regarded by the force. In his retirement address in the Four Courts he paid tribute to three gardaí whom had appeared before his court and had been subsequently murdered, including Det Garda Jerry McCabe who was murdered in 1996 by the IRA when they were officially on a ceasefire.

For a number of years Buchanan served as the Circuit Court nominee on the three- judge Special Criminal Court, which required 24-hour security on his Castleknock home .

He frequently sat on this juryless court – which tries terrorism and serious organised crime case – with the late Justice Liam Hamilton and Mr Justice Donal Hamilton then of the Supreme Court and continued to sit on it after his retirement from the Circuit Court until the age of 72.

Prior to his appointment as a judge and during his career as a barrister he stood as a candidate for Fianna Fáil in the Dublin South Central constituency in 1966 and 1973.

áil politician Brian Lenihan snr. Both families were close, living near each other in Castleknock and spent holidays together in Connemara.

He was for a number of years the lay representative on the Church of Ireland General Synod and was a legal assessor to the chair of the synod. He also served on the boards of two Dublin schools, St Columba’s and the King’s Hospital.

He was also an active member of the Friendly Brothers of St Patrick, a society that once had a premises on St Stephen’s Green and was founded some centuries ago to oppose the then widespread practice of duelling in Ireland. The society was wound up on the 1980s.

John Gerard Buchanan was predeceased by his wife, Ann (nee Shackleton), whom he married in 1957. They had four children, Peter, Catherine, Stephen and Fiona, all of whom survive him.

4 Sienna Miller: ‘I could have not gone out, not worn what I liked. I took them all to court instead’