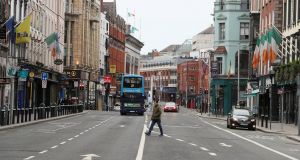 If initial lockdowns offered personal, cultural and economic revelations, then a third one could offer political ones. Photograph: Brian Lawless/PA Wire

In November, when many people predicted Ireland would be “back in lockdown” in January, I wondered what qualities Lockdown 3.0 would have. Lockdowns have instigated huge societal revelations, and each stage has had a broad quality or theme to it. So far, there has been an awful lot of interrogation about the economy and late-stage capitalism, along with what work is essential and what less so, a lot of discussion about culture as a crucial component of existence, and also personal revelations about the directions of our lives, what and who is important to us, and what really matters.

We knew what the future held at the time in terms of boomeranging back into lockdown, but the Irish Government, and many people, dove into the festive season, and public health guidance fell apart as the restrictions were lifted. This happens when the easing of restrictions eats into adherence to basic guidelines around distancing, travel, indoor activity and human touch. I began to think that if initial lockdowns offered personal, cultural, and economic revelations, then a third one could offer political ones.

A friend likened Lockdown 1.0 to being in rehab: that we were being made sit with our feelings and thoughts, that none of our go-to quick-fix “nice things” or release valves and distractions were available to us, that we were kept apart from others, and what we were left with was ourselves. In that moment, many people reflected on their lives, their relationships, and the robustness of their real-life social networks when the workplace, weekend socialising and other activities were taken away.

Reflections on labour and economic systems permeated both lockdowns. The State stepped in so that people who were losing their jobs en masse would not become destitute, would not be evicted (although that still happened to some), as well as assisting employers, although plenty of businesses have sadly gone to the wall. The importance of art and culture was highlighted in both lockdowns. The live events sector, artists and cultural institutions and organisations succeeded in rightly claiming their space in social discourse. Art came to the fore as a healing force, and initiatives such as the Other Voices series, Courage, offered a salve. We began to appreciate the importance of audience. It’s not enough to simply consume a piece of art, because it’s the experience of doing so as a collective where a lot of the magic lies.

If we have begun to process the personal, the economic and the cultural, then the next step is processing the political. In Ireland, the political aspect of Lockdown 3.0 was almost immediate. Many people were furious at the Government’s shoddy leadership and their botched Garryowen. This is a continuation of a growing irritation with the haplessness of the administration, with more eyes on them than ever (from the public’s point of view) because it’s not like there’s anything else to do. This interrogation of power structures within lockdowns has bolstered everything from the legitimate anti-racist movements globally, to the misguided anti-lockdown protests and the conspiracy and disinformation underpinning them.

The publication of the Mother and Baby Homes report, and the discourse around it, combines so much of what we have been reflecting on. I think many people have met the report with a mature reflection on the society they grew up in, and how this theocratic culture impacted them and their families.

It’s telling that people aren’t swallowing the Government’s lines, that it’s felt apologies aren’t conclusions, that the report is being interrogated for its shortcomings, and that survivors are the ones being listened to. This is a new Ireland confronting an old Ireland and searching for ways to explain, expose, heal and deal with the past, much of which is not ancient history. Just as our past selves, our past habits and past behaviours were pulled to the fore by the pandemic, so too has a past Ireland. Who were we then, why, and how can we chart a new course?

This is a question that permeates our lockdown sense of self, and now our national sense of self. One wonders how the political forces who governed throughout the 20th century – Fine Gael and Fianna Fáil – will be able to find a place in a country that is increasingly prepared to confront the past and demand justice and consequences.

This issue of political power will continue to be exposed, and the actors who benefit from it and exert it, will come under increasing pressure as a political awakening follows the cultural, economic and personal ones. That’s not to say that things will change dramatically and instantly, but perhaps the political establishment may ultimately bemoan the consequences of a population being left with their own thoughts. A prolonged period of reflection can lead to new ideas, new ways of being and, devastatingly for those who rely on maintaining power in an “ever thus” mode, a desire for radical change.