Una Mullally: Fine Gael politicians need to own their politics 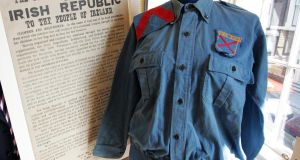 An original Fine Gael “Blueshirt” being prepared for auction in Dublin in 2007. Note “Fine Gael” badge on shirt at top right. “Fine Gael might not be on the same march as the American right wing, but we are existing at a moment where the danger of the rise of the right is acute.” File photograph: PA Wire

Vincent Browne once said that the problem with Irish politics is the lack of politics. In Ireland, mainstream neoliberal and centre-right Irish politicians rarely talk openly about their political ideologies, preferring instead to pretend that policies and plans exist in some kind of friendly vacuum that is about the good of the country. It’s a veneer that’s also a mask, although of course, there are plenty of politicians who bask in an absence of ideology, but that, in and of itself, is strangely ideological too.

This brings us to wondering why people would be surprised by some of Fine Gael’s younger membership gravitating towards the nihilistic, nativist, American rightwing, as the president and social media officer of Young Fine Gael, Killian Foley-Walsh and Chloe Kennedy did, by attending the National Conservative Student Conference hosted by the Young America’s Foundation.

People should be allowed to go to whatever conference they want. If it happens to be one populated by people who are perhaps a wee bit hateful, and if that’s who you don’t mind aligning yourself with in some small way, well now we all see it. I’m hardly surprised at Young Fine Gael members travelling to the conference. Elements of Young Fine Gael have tended to at least foster the perception of revelling in a particular strain of privilege, with young fellas walking around in their Confirmation suits debating “the market”, newly invigorated by reading Milton Friedman’s Wikipedia page. Each to their own.

Right-wing commentators will say that condemning Fine Gael members for attending a right-wing conference is yet another example of the intolerance of liberals. This is a beloved trope because it allows for the inversion of their own intolerance, and positions intolerance of intolerance as an attack on tolerance itself. Inventing a stance of victimhood and almost co-opting the semantics of progress, such as pretending to stand up for “free speech”, and “diversity of thought”, is the most tired of contemporary right-wing positions, but it’s also nebulous and difficult to counter because it’s disingenuous, which is a factor embedded in its design. Those who deplore and fear the ascent of modern rightwing fundamentalism, particularly this strain of American proto-fascism, will despair at young Irish conservative political wannabes travelling to meet their American kin who are swimming in that soup, and are perfectly entitled to give out about it.

Killian Foley-Walsh - who adds the hilarious flourish of “Esq.” to his Twitter profile - describes himself as a “Babyfaced Blueshirt”. If you honestly, or even jokingly, align yourself with the fascistic, far-right ideology of 1930s proto-Fine Gael, then what should we expect? Foley-Walsh isn’t a kid, he isn’t a teenager, he’s a man in his twenties. These are educated adults who are showing their colours, as they are entitled to do.

But let’s get one thing clear. The most severe criticism of these Young Fine Gaelers did not come from liberal empaths sad about right-wing people going to a right-wing conference. No, it came from within the party itself. A TD, Noel Rock, an MEP, Maria Walsh, and Dublin Central general election candidate, Deirdre Duffy. Walsh even took the extraordinary step of calling for Foley-Walsh to resign. Imagine that, an MEP asking the leader of the youth wing of the party to resign because he went to a conference that aligns in some parts with the type of political outlook that would genuinely propel someone towards the Fine Gael party. Duffy said, “I am deeply concerned about anyone who aligns themselves with such conservative US elements,” which is bizarre, considering the party leader, Leo Varadkar, invited Mike Pence to Ireland.

Fine Gael might not be on the same march as the American right wing, but we are existing at a moment where the danger of the rise of the right is acute. Aligning oneself with the neoliberal hodgepodge of Fine Gael is perhaps not the best way to counter that. Walsh in particular seems to have a bit of a pick’n’mix approach to political ideologies. One of the aspects of Walsh’s European campaign, for example, was the insistence that mental health would be a key focus of her term. First of all, it is a bit of a reach to think that getting elected as an MEP is how one could have the greatest impact on such a frontline issue. Secondly, Fine Gael’s policies, particularly on housing, are actively damaging young people’s mental health in this country. If you wanted to counter the stress and strain young people are under, why wouldn’t you fight those policies, not endorse them?

Diversity of thought and debate within political parties is hugely important. But the best way to bolster progress in a political party structure is to join a progressive party. New additions to Fine Gael, such as Duffy and Walsh, made their choices, and they should own them. There is integrity in people actually owning Fine Gael’s politics, and being honest about their ideologies. If others find that objectionable, who cares? That’s what diversity of opinion is about. But don’t get a job in Guinness and then complain about the smell of hops.

A statement by six members of Young Fine Gael’s executive said that, “a picture has been painted of a conservative backward YFG in recent days, that is not the YFG we see. We see a YFG committed to the ideals of equality of opportunity and a fair and just society.” This is nice, but Fine Gael - as demonstrated by its approach to Irish society in which young people, alongside the most vulnerable people in this country are suffering - cherrypicks which ideals of equality, opportunity, or fairness it gets behind. Pretending the party is different, based on one’s personal standards of palatability, doesn’t make it so.