Una Mullally: Dublin will fail unless housing crisis is tackled

The council is prioritising developments for visitors to capital, not its inhabitants 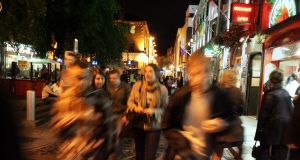 It is nonsensical that the temporary accommodation needs of visiting tourists are being prioritised over the long-term needs of others in the city. Photograph: Cyril Byrne

I doubt David Kitt intended to start a national conversation about the state of Dublin by detailing his own personal circumstances of not being able to afford to live in the city. These are circumstances many others are also experiencing. But a tipping point has been reached for people who live in Dublin and who are leaving it, about the type of change the city is undergoing.

As upsetting as it was at the time, I understood why many of my friends emigrated during the recession. Many believed Ireland simply couldn’t provide them with the lives and opportunities they wanted as the economy imploded. I get that. But the people I know considering leaving Dublin now, or who can’t afford to live in the city, are not people who are unemployed or who are footloose and in their 20s, but people in their 30s and 40s who made their lives here and are being pushed out by escalating rental costs. They are not leaving because the city’s economy is in tatters, they are leaving because money is being pumped into town. There is something seriously wrong.

Last week, I watched Citizen Jane: Battle for the City, the 2016 documentary on the journalist and activist Jane Jacobs. Her concerns and responses are as relevant to Dublin today as they were to Greenwich Village in the 1950s. In her 1958 essay Downtown is for People, Jacobs wrote, “There is no logic that can be superimposed on the city; people make it, and it is to them, not buildings, that we must fit our plans.”

Most of the development in Dublin right now has nothing to do with the people living in the city. Fora.ie published an article last week about Dublin City Council’s response to an application for the construction of a nine-storey aparthotel with 269 rooms on Great Strand Street and a nine-storey hotel on Upper Abbey Street with 207 bedrooms. “There is a concern that the proposal could contribute to an over-concentration of this type of use which would result in an excessively transient population in the vicinity of the site.” No s**t, Sherlock. And who is responsible for the worrying over-concentration of hotels and aparthotels in the city? Well, that would be the council which doles out the planning permission, right? The same entity approving this sort of development is now thinking “oops”. Too late.

Planning was recently granted for another site on Great Strand Street for an aparthotel. The council also recently gave planning permission for the demolition of several buildings on Middle Abbey Street to build a 365-bedroom hotel. And as Fora reported, Twilfit House on Jervis Street and Abbey Street is being developed as a hotel. Why aren’t these sites and buildings being developed for housing? Because more profit can be squeezed out of a site by developing it for tourists than for prospective residents. More units, more profit, which is why we apparently can’t build housing in the city, yet ridiculously expensive to rent “student accommodation” is being built by the thousands.

I’m constantly hearing crowing about a shortage of hotel rooms in the city. It is nonsensical that the temporary accommodation needs of visiting tourists are being prioritised over the long-term needs of others in the city. Why is it more important that a load of lads over on a stag from Newcastle have somewhere to stay for a weekend than a family who call this city home? Go on then, build more hotels, sure the council has to put the homeless families somewhere.

When Kitt wrote his piece, a few people decided to have a pop at him or offer unsolicited advice. I doubt anyone being a smart arse about David Kitt is themselves experiencing a situation similar or worse than him. It takes a lot of privilege and comfort to take a swipe at someone sad about having to leave the city they love. For those who suggested he move somewhere else in Ireland, you’re missing the point. This is about the capital becoming unlivable.

Right now, we need to unite on the housing crisis, which is multifaceted, ranging from the life and death situation of people dying on our streets to artists leaving town. Obviously one situation is less severe than the other, but they are stemming from the same place. The indication that a directly elected mayor in Dublin will be delayed by another six years is a disaster. We need accountability in our council, not an unelected chief executive whose term can last up to 10 years. We need candidates to propose a vision for the city and for voters to connect with ideas about what kind of city we want. We need a people’s movement that protests, occupies, lobbies and supports candidates in the local elections next year who prioritise addressing the housing crisis. We need a minister for housing who actually confronts the crisis with action, not the kite-flying and PR of Eoghan Murphy. We need to start exerting our power as people and communities, because underneath the surface of glossy Dublin development, the city is actually failing, fast.