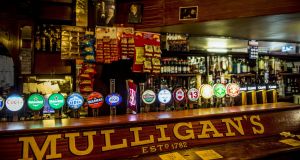 Only a few places on the 1892 map of Dublin’s pubs remain, including Mulligan’s on Poolbeg Street. Photograph: Brenda Fitzsimons

A good few years ago, I heard a fable involving the New York Dolls, the punk band who predated glam rock, yet had a penchant for big hair, androgynous clothes and high heels. They looked amazing, for the most part.

But one day, the New York Dolls were hanging out in a bar looking their outrageous best, when The Ramones walked in. The Ramones were wearing their uniform; jeans, t-shirts, leather jackets. The Dolls faced the crippling realisation that they looked ridiculous in their satin scarves and thigh-high boots. The tide was turning.

In many ways, it doesn’t really matter how true this anecdote is. What it evokes is primal, that awful feeling when one’s self-awareness snaps into focus and you’re at a loss as to how or why it was so bizarrely distant up until that moment.

A few weeks ago, myself and Catherine Cleary wrote a piece kicking the tires of the giddy bar and restaurant scene in Dublin, and examining the impact of escalating key money, lease costs, and the trend of expensive fit outs. The correlation with the ostentatiousness of the Celtic Tiger is clear, although this time, those investing in bars, restaurants and hotels are gunning for tourists as much as anyone else.

Irish people seem to crave newness. It’s probably a hangover from being a few generations away from peasantry. If the poverty in our DNA explains why we rip out kitchens with great frequency, then it also explains why we knock down old buildings and replace them with walls of glass. When the Celtic Tiger crashed, The Ramones walked in, and a chunk of Ireland was left red-faced holding their hot tubs and Louboutins.

Misplaced nostalgia and conservatism can sometimes play a damaging role in blocking innovation. Fair enough. But throwing everything out and not keeping the nice stuff is also thuggish.

We exist in an economic culture that once again sees expansion as synonymous with success, and there is nothing fashionable about valuing smallness, or aching over yet another cultural space being turned into apartments.

There’s nothing fashionable about wanting things to stay the same. It can be hard to express why character and community should be preserved. You are viewed as a naysayer, the lone voice at the dinner table in 2005 wondering aloud whether there’s something wrong with a Dublin 4 semi-detached house being the same price as a bungalow in Beverly Hills.

The creative people in the city are doing a lot with very little, but this spark that always lit the energy of the city is being snuffed out. There are very few opportunities now for the youngsters running club nights, or the promoter who wants to create a vibe, not make a million.

As nightclubs close, their economic footprint viewed as better maximised with hotels, there is very little being done to recognise the cultural value that quality parties provide, how they foster communities and allow for the exchange of ideas.

It’s probably no surprise then, that the bulk of nightlife in the city is happening in people’s houses, The Session becoming a cultural institution.

There are many reasons why nightlife in Dublin doesn’t mimic other European cities, but the prohibitive costs of operating a simple bar – from our incredibly restrictive licensing laws to high rents, from escalating wage bills and staff shortages to the price of stock – are front and centre.

So because the fabric of the city’s nightlife gets woven by rich people, the things they manifest become the norm. Because someone spends loads of money on a place, another place follows suit, and on and on, until what should be exceptional becomes homogenous.

The Dublin Inquirer recently published an article about a 1892 map titled Dublin’s greatest evil (the public houses) , discovered in June by Guinness archivist Fergus Brady. The map showed a remarkable concentration of pubs around Thomas Street, Meath Street, Parliament Street, Little Britain Street, Sackville Place and Hawkins Street. A few places on the map remain including Mulligan’s on Poolbeg Street and The Swan on Aungier Street.

If a similar map was drawn up now, how would we look back on it in 10 year’s time? For better or for worse, the humble pub is one of our greatest cultural assets, and while replicated around the world, remains a uniquely indigenous setting millions flock to experience.

Globally there is an emerging consensus that the gentrification of urban areas creates almost irreversible damage to the things that cannot be measured with such clarity as profit. I keep saying that 2018 will be viewed as a landmark year for Dublin, but not for the right reasons. It will be remembered as a year where the gentrification steamroller went into overdrive, and when the fabric of the city was irreparably changed.