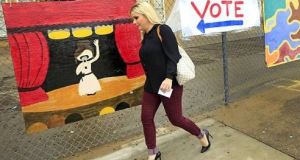 ‘One side wanted to enable young people and have their contribution to society and capabilities and enthusiasm recognised and their franchise extended.’ File photograph: Getty Images

The Seanad voted on Wednesday to delay a Bill seeking to reduce the voting age in local and European elections to 16.

Why did they do it? Especially when Fianna Fáil actually stated in their manifesto that they wanted to trial a lowered voting age?

“What we’re seeing today is a fear from established politicians that the youth vote will not go their way,” Ruane said in the Seanad.

“Fine Gael and Fianna Fáil are standing in the way of the democratic process out of fear.”

She then dismantled the arguments put forth by Fine Gael and Fianna Fáil as to why the Bill should be delayed.

It wasn’t particularly difficult, considering those arguments are nonsense, disingenuous and cynical, designed for obfuscation - and to butcher clarity and truth.

We shouldn’t be surprised when Fianna Fáil starts crab-scuttling out of the room, throwing excuses like confetti, as the terrifying realisation dawns that their manifesto guff might actually be implemented by people who are genuinely invested in the issue.

Nor should young people be surprised by the packaged conservatism of Fine Gael, peddled with slickness by besuited middle-management trying to swizz them out of something that’s rightfully theirs.

Senator Neale Richmond of Fine Gael was at least honest. He agreed with the Bill, but due to the whip was not in a position to support it.

Richmond, however, declined to properly detail why Fine Gael was opposed to this Bill. The slickness was there, the rationale wasn’t.

Jennifer Murnane O’Connor of Fianna Fáil spent a deal of her speech rewriting history with the assessment of how her party saved the Seanad (I was on the margins of the anti-abolition campaign by the way, and they didn’t).

Independent Senator Gerard Craughwell was reprimanded for addressing the many young people gathered in the public gallery, instead of the Chair.

“Today you’ve had your first lesson in politics,” he said, then paraphrased Richmond: “I believe you should have the vote but the whip says you can’t . . . Lesson number two, if you don’t want to do it, kick it to a referendum and we might get to it in 25 years’ time.”

Craughwell was livid and energised by his rage. He called the opposition to the Bill outrageous, and said the reason Fine Gael and Fianna Fáil were doing so was because they had not yet been successful enough in infiltrating groups of young people like those in the gallery to get their votes.

“Folks, rock on!” Craughwell said. “Drive us insane and get the vote for 16-year-olds.”

What was interesting was the divide in the chamber, not just in votes, but in the attitude towards young people.

One side wanted to enable young people and have their contribution to society and capabilities and enthusiasm recognised, and their franchise extended.

The other ultimately ended up concocting excuses that patronised Ireland’s young people, such as relatable human politician Michelle Mulherin of Fine Gael.

She began her anthropological assessment of these young folk with: “You could only really be impressed by young people,” as if Ireland’s youth are some kind of lost Amazonian tribe.

The job of adults, Mulherin said, is to protect and nurture young people, and presumably letting them out into the wilds of polling stations would besmirch such innocence, much like fornication, the internet, not going to Mass, etc.

It’s odd that Mulherin thinks young people need to be protected and nurtured so much, because I distinctly remember her calling for National Service to be introduced for unemployed young people. Funny that.

After Aodhán Ó Ríordáin spoke about how it would be nice to have people involved in politics who weren’t tarnished by the conservative creep that happens when you get a mortgage; after David Norris got frustrated by the opposition to the Bill and mused, “We should involve them as young as possible, there’s a hell of a lot of aul ones and aul fellas I would like to stop having the vote if I could”; after Fine Gaeler Paudie Coffey compounded Mulherin’s patronising input, saying, “I’m not convinced that at 16 years of age that they are ready to formulate views that will impact substantially in electoral ways”; after Niall Ó Donnghaile of Sinn Féin put it bluntly that “Fine Gael and Fianna Fáil don’t like giving people votes”; after Aidan Davitt of Fianna Fáil channelled John Cage’s “I have nothing to say and I am saying it” adage; after Fianna Fáil’s Diarmuid Wilson arrogantly declared with impressive delusion, “I certainly am not afraid to give them a vote. Absolutely not . . . I’ve no doubt that if they had a vote at a time when I stood at the local elections, I would have doubled my vote”; after Colette Kelleher spoke excellently about how the recession impacted upon young people and that it was about time some of that harm was undone and democracy strengthened; after Alice Mary Higgins and Frances Black supported it, the inevitable occurred.

The Amendment to delay the Bill passed. Why?

Everyone who spoke in support of the Bill laid out arguments for lowering the voting age that made sense. Everyone who wanted to kill it or delay it, presented nonsense arguments.

Let it be clear to young people - and I’m sure it was to those in the gallery and others watching online - that Fine Gael and Fianna Fáil’s lip service towards them is just that.

What happened on Wednesday evening was a move to exclude young people from the democratic process, young people who are politicised, who are engaged, who pay tax, who contribute to their communities and their society.

If they have to wait until 18 to vote, they’ll be wise enough then - as they are now - to remember Wednesday night at the ballot box.