The Troubles did not find Martin McGuinness. He found them 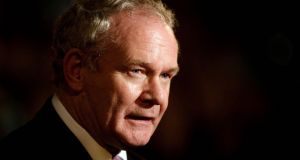 Unlike Martin McGuinness, the vast bulk of the population got through the Troubles by simply ignoring them. Photograph: Niall Carson/PA Wire

A theme in republican tributes to Martin McGuinness last week was that he joined the IRA in reaction to circumstances, that – in Gerry Adams’s words – “he didn’t go to war, war came to him”, that he was no more of a protagonist than unionism and the British government, and that none of this is sufficiently acknowledged by the media and official Troubles narratives.

This seemed to find a wide resonance with the nationalist population, yet all these perspectives have received a regular airing from the outbreak of the Troubles until the present day, including by public broadcasters and right-leaning newspapers. Such views constitute mainstream opinion in academia, are implicitly accepted by a range of government policy, and of course have the significant endorsement of Sinn Féin’s electoral mandate. Most of the effort, study and coverage of the past half century in Northern Ireland has focused on protagonists and their circumstances.

The perspective that has really been overlooked is how the vast bulk of the population got through the Troubles by simply ignoring them.

Occasionally, it seems that someone is about to allude to this, but then they just make a familiar point about how such and such a person grew up in the same streets as McGuinness without joining the IRA.

What never seems to be mentioned are all the people who neither grew up in those streets nor joined the IRA, or its counterparts, although theirs was by far the commonest experience of what is now grandly called “the conflict”. Their experience does not necessarily negate the protagonist’s tale but in numerical terms it completely swamps it.

The extent to which people can ignore violence on their doorstep is bizarre to recall. Southern readers who spent the Troubles watching footage of riots and bombs thinking “thank God I don’t live there” should note that people living one street away from the riot or bomb were almost certainly thinking the same thing.

My clearest memory of this is of an office meeting in 1995, during which west Belfast was progressively set on fire around us, in protest over the early release of a British soldier convicted of murdering two teenagers in a stolen car.

We had a panoramic view of the spontaneous mayhem – the worst the city had seen in several years – through the office windows. However, it was quite an important meeting so nobody said a word. Besides, we had only just been introduced, so risking a political conversation was unthinkable.

Incongruous banality is apparently a feature of war zones. It was even more incongruous in Northern Ireland, where something much less than a war took place amid utterly mundane provincialism. Anyone who hosted an overseas guest during the Troubles can attest to their endless proclamations about “how normal everything looks”. What they missed, and we are now forgetting, is how normal everything felt.

Not everyone was able to ignore the violence successfully. McGuinness came to them, as Adams might say. Today the issue of victims is debated in terms of hierarchies, or of the culpability of everybody or nobody. This happened during the Troubles as well – but the main discussion on victims was how not to be one.

There was an agreed table of risk, ranging from dangerous occupations such as taxi driver, down to everyday activities that could still be fatal, such as shopping. People were not judged for putting themselves in harm’s way, however, Victimhood was largely assessed as a matter of luck.

Most of Northern Ireland reacted to its circumstances by developing these kinds of coping mechanisms. Other concepts that now seem alien included a suffocating cult of respectability that said “I’m not involved” just loudly enough not to draw too much attention to yourself. Try explaining that to the social media generation.

Given the fashion for telling history through ordinary lives, it is noticeable that there is so little interest in ordinary life during the Troubles. Presumably its bourgeois conservatism makes it an intellectual abomination.

But as Northern Ireland enters another, perhaps terminal period of political instability, there is value in knowing how stable it still was through an infinitely more difficult time.

1 Michael Smurfit: ‘I asked Trump to invite me to the White House for my 80th birthday’
2 The strain is starting to tell on Brendan O’Connor
3 We need to pay very close attention to what is happening in Britain now
4 Coronavirus: HSE experts support the early reopening of schools
5 Small businesses are cannon fodder in zealous anti-virus experiment
Real news has value SUBSCRIBE