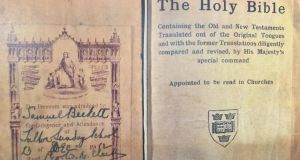 May Beckett, mother of the writer Sam, was a bit like a church spire. Tall, thin, and austere, she soared above the imperfections of a wicked world, or tried to anyway. And like many spires, she also had an in-built clock, synchronised with religious services.

Whenever she attended her local Church of Ireland in Foxrock, she always left the house precisely five minutes beforehand. Entering by a side door, she would take her place in the family pew. Then, immediately, the bell for start of service would ring. Anyone who was in after her was late.

So happily, and for a change, I too was early last Saturday night, when taking my seat in the same pew, albeit not for a service. The occasion was a staged performance of Samuel Beckett’s novella The End, the latest in a now-annual series commemorating Tullow Church’s links with the writer, who as a child often accompanied his mother there, reluctantly.

And viewing the event from May Beckett’s angle, as it were, added a layer of dramatic tension to the Mouth On Fire company’s production.

For as voiced by Marcus Lamb, The End features a range of language and themes you wouldn’t normally hear in a church, and certainly not during the Bible classes the future playwright also once attended here.

The typically-decrepit protagonist’s reflections are firmly focused on this world and its many indignities, rather than the next. No major bodily function, for example, is left unexplored.

And yet, as is his way, Beckett eventually finds a sort of beauty in the human condition, almost despite himself. I can’t speak for his mother. But when The End ended, the rest of us went forth in peace, uplifted.

Among the congregation, I was fascinated to discover, were Noel and Gill Hughes, who used to own the old Beckett house, Cooldrinagh (named for May’s original home in Leixlip), at a time when the most famous former occupant was still alive, in Paris.

They wrote to him in 1976 with questions about his earlier life in the place, and he answered these with trademark politeness, adding: “If you ever meet my ghost in the house or grounds, give it my regards.”

But a decade later, they got to meet the still living-and-breathing Beckett, in exile, bringing some of the Irish whiskey he loved. And like most people who met him in his late years, they were struck by his courtesy and charm. He in turn was highly amused to learn that because the house was open to literary tourists then, it was exempt from property tax. “Well at least I have been of some use,” he laughed.

A photograph from that occasion, with Beckett’s hawk-like blue eyes (an inheritance from his mother, like his physique in general) undimmed at 81, is part of a small exhibition on the writer and his family in the adjoining church hall.

This also includes his correspondence with the Hugheses and a copy of the frontispiece of a Bible, presented to a six-year-old Beckett in 1912 for his “diligence and attendance” at Sunday school.

Alas, Cooldrinagh is no longer open to visitors, and now barely visible behind a high hedge. But Tullow Church aside, Brighton Road remains a gateway to Beckett Country at large, the part of south county Dublin, between the sea and mountains, that he wrote about obsessively all his life.

This was where his affable father, Bill, found religion.

Avoiding Sunday service, he would instead “go to church with the birds up the mountains”.

In later years, his son often accompanied him on those walks, one of which is touchingly recalled in The End.

Of course the stretch of Brighton Road that heads back towards the city, via Foxrock village, also features in Beckett’s writings, notably the play All That Fall.

Set on a race-day at nearby Leopardstown, All That Fall is replete with local landmarks, including the church, where a Miss Fitt (one of the text’s many word-plays ) experiences the sort of spiritual fervour that, for the playwright, probably peaked with his First Communion.

Given its biblical title, from Psalm 145, the play would be a doubly suitable future project at the venue. But like Miss Fitt, it might require some adaptation to its surroundings. It was written as a radio play.

As The End’s director Cathal Quinn reminded me, Beckett was fierce in his insistence that work be presented as designed. So if All That Fall were to be staged anywhere, the venue – like the humour – would have to be dark.