Blunt instrument – the Kilrush evictions of 1888 and the ‘Vandeleur ram’

Evictions combined with advent of photojournalism brought ram under spotlight 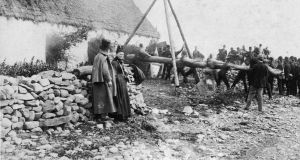 A battering ram is used to break into a house on the estate of Captain Hector Vandeleur in Co Clare, during an eviction of tenants for the non-payment of rent in 1888. The tenants have stuffed foliage in the doors and windows to hinder entry. Photograph: Sean Sexton/Getty Images

While leaving their Christian names on the streets of the town they built, as noted here earlier in the week, the Vandeleurs of Kilrush earned a more dubious fame in west Clare for their mass evictions during the Famine years and again in the 1880s.

The notoriety stopped short of enshrining the distinctive surname in the English language, like Captain Boycott’s.  But only just, it seems, because the infamy of the 1888 evictions in particular, combined with the advent of photojournalism, have made the Vandeleurs synonymous with a fearsome piece of equipment that was central to the drama then.

Ever since, whenever you see a picture of a forced 19th-century eviction in Ireland, it almost invariably features what historians call the “Vandeleur ram”.

That’s the contention of Ed O’Shaughnessy, who will explore how this unwanted monopoly came to pass in an article for the forthcoming issue of the annual history journal, The Other Clare. Himself five generations removed from the county, and living in the US, he has spent a long time researching the period.

And among his conclusions, as he will argue in the article, is that “all known photographs depicting a battering ram at a Victorian era Irish eviction are, in actuality, photographs of a singular ram”, the Vandeleur.

This has come to represent the horror of every eviction from the period, he says.  So much so that he recently saw it used to illustrate a feature on evictions during the Famine, decades before battering rams were in fact deployed.

In the 1840s, a crowbar or pick-axe was usually sufficient to force a family out of what passed for house and home.  Resistance was lower then, and less organised.

It was the near-famine of 1879 and the launch of Michael Davitt’s Land War that set the scene for the stand-offs of the 1880s, when battering rams became essential to the eviction tool kit.

The Vandeleur evictions came late in the decade, in July 1888, after much of the land problem had been settled.  But their extent, advance advertisement, and protracted nature attracted huge attention. A crowd of 10,000 gathered to witness one day’s proceedings, while the world’s press also took an intense interest.

In newspaper archives of the time, one of the most vivid accounts is an un-bylined (presumably syndicated) feature that made it all the way to New Zealand, and a rural weekly called “Te Aroha and Ohinemuri News”.

Headlined “A Day With the Vandeleur Evictors”, but in obvious sympathy with the evictees, it is full of dramatic detail, from the forlorn resignation of one woman as the fire in her hearth is ceremonially doused by “a sheriff’s man”, to the distress of another as her door is forced in, before one of the evictors realises it’s an administrative error and the widowed resident is not on their list.

As for the battering ram, its grim work was described by this newspaper that same week, in connection with the house of a Michael Cleary.   Cleary was unusual among the evictees in being a relatively “strong farmer”, of around 40 acres.  And his house was strong too, it seems:

Although the beam of the ram was a formidable “30 feet in length”, mounted on a tripod and swung on chains, with a metal-covered leading edge, it struggled to penetrate the part of the Clearys’ back wall chosen for the assault.

“The ram was taken charge of by about a dozen Emergencymen, [who] worked with a will. The huge instrument struck the wall with its ironshod heel with a dull and painful thud but without making any impression upon the solid masonry [. . .]. About 30 blows were given with terrific force before anything that might be considered a breach had been affected, and then with a cheer the Emergencymen rushed forward only to be received with a shower of hot water from the occupants.”

Eventually, when about half the wall had been knocked in, the family emerged to be arrested and immediately “brought before Mr Cecil Roche RM who, sitting on a stone fence, held an impromptu court of justice” and charged them with obstructing the sheriff.

The demolition continued, meanwhile, on the rest of the back wall and one of the gables. But it had not succeeded in bringing the house down when the clock struck 4pm, the legal curfew for such work. Thus the “Emergencymen” withdrew for the night, the hundreds of troops returned to their temporary quarters at Kilrush House, and the siege-gun-like ram fell silent, although its dubious celebrity was already assured.

1 Clontarf tenant says her garden was ‘destroyed’ without warning by Irish Rail
2 RTÉ receives complaint from union after ‘issue’ with spokeswoman’s accent
3 Varadkar promises ‘early retirement pension’ amid backlash over gap
4 Chris Hadfield on the climate crisis: ‘The world has seen much, much worse’
5 Ireland has fifth-largest number of billionaires per capita in the world, says Oxfam
Real news has value SUBSCRIBE