Ireland should be wary of a German embrace

Ireland should aim to be a leader of small, open economies in the EU 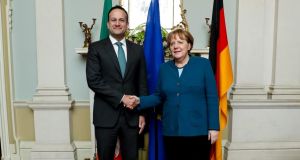 A female German as president of the European Commission should be a major political victory for Berlin. Wrong.

The collateral damage has been huge, both for those who believe in the spitzenkandidat (lead candidate) process for commission president and for those hoping for a coherent German vision for Europe.

The difficult position that Taoiseach Leo Varadkar found himself in over the last few weeks highlights why Ireland should be wary of a smothering German embrace. Berlin’s ability to prioritise its own interests and then expect the rest of the European People’s Party (EPP) to acquiesce (in this case on giving up the presidency of the commission) was successfully refused on this occasion, with Ireland at the core of this resistance.

But for the EPP read the wider European Union. In reality, this event betrays a deeper malaise at the heart of Germany’s relationship with Europe.

Ireland’s natural allies in Europe lie in the Netherlands, the Flemish region of Belgium, the Nordics and across central and eastern Europe

German regimes, for the last two decades, have prioritised perceived German interests to the detriment of the cohesiveness of EU policymaking. This, of course, occurs with all member states, but with Germany this process has been so consistent in its application that it’s beginning to seriously weaken EU effectiveness.

Industrial policy is a good example. Suddenly, China is the enemy at the gates and ready to decimate Europe’s industrial base. This may well be the case – and certainly there is a real argument to be made for building European champions to provide a global scale – but this volte face wasn’t the result of coherent EU strategising.

It was born of Berlin (aided by Paris) being seriously peeved by the EU refusing to sanction the merger of Siemens and Alstom. As a result, out the window must go 40 years of EU competition policy.

And let’s not forget the euro – the single issue that could collapse the whole EU edifice. The German response to the fundamental structural weaknesses of monetary union – such as cutting the umbilical cord between banks and national government finances – has been painfully slow, focused on domestic German political interests and devoid of all long-term vision.

And the British think they have problems.

Much recent commentary has focused on the need for Ireland to build new relationships in the EU (and globally) in a post-Brexit environment. This is to be supported.

Without Britain, there is a real risk that decision-making in the EU will drift aimlessly back into a Franco-German axis

But to place Germany at the centrepiece of that strategy (as evidenced by President Michael D O’Higgins’s recent jaunt in Berlin) is to seriously misread Europe’s political landscape. Economically, Ireland’s natural allies in Europe lie in the Netherlands, the Flemish region of Belgium, the Nordics and across central and eastern Europe.

Ireland should be aiming to become a leader of smallish, open economies in the EU, rather than hitching our wagon to a Teutonic behemoth struggling even to accept its modest leadership responsibilities in the EU.

In effect, the EU has become a prisoner to Germany’s combined historical psychoses which are preventing progress in all of the policy areas highlighted above. You think Irish debates on water charges and property taxes are irrational? They pale into insignificance in comparison with internal German debates on the evils of inflation and government debt.

The real German legacy since reunification in 1989 – beyond the soothing (but largely meaningless) rhetoric of solidarity and friendship – has been to drag Europe along into this Freudian maze. Berlin lies trapped in the death grip of the balanced budget/schwarze null cult and it’s the rest of the EU that’s paying the price.

For Ireland, the challenge in Europe should not be to become Germany’s new best friend. That’s an obvious post-Brexit rebound. Rather it must be to formalise a coherent bloc in the EU that is open to global investment, engaged in meaningful Atlanticism and, most importantly of all, willing, on occasion, to place European interests over purely national ones.

Without Britain, there is a real risk that decision-making in the EU will drift aimlessly back into a Franco-German axis which is far from free trading, mired in historically tinged disputes with the United States and implicitly seeks a more centralised Europe.

The recent European election results were a shot across the bow of the pro-EU forces in the European Parliament. People love Europe, they just don’t want a United States of Europe.

In this context, the Government has an ideal opportunity to lead the development of a vision for Europe that is not dominated by the overwhelming presence of Berlin or Paris. But to do this, to really shape Europe, Dublin must realise that you can’t be everybody’s best friend.

The Taoiseach’s actions over the past weeks are an excellent starting point.

Eoin Drea is a researcher at the Wilfried Martens Centre, the official think tank of the European People’s Party which includes Fine Gael