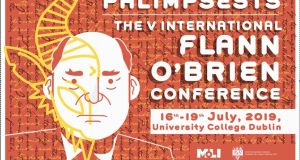 Poster for the fifth international Flann O’Brien conference, which starts on Tuesday and will involve several days of non-stop talking by academics and other Flannoraks, from at least four continents.

If you’re hoping to experience what Patrick Kavanagh called “the tremendous silence of mid-July” anywhere in Dublin next week, then, thanks to one of his old drinking pals, you should steer clear of UCD.

The event follows similar ones in Vienna (2011), Rome (2013), Prague (2015), and Salzburg (2017). So this will be a homecoming for the Strabane-born but Dublin-reared man behind the pseudonym, Brian O’Nolan. And from a personal viewpoint, it involves at least one alarming new development.

Having attended all four previous events in a mostly observational capacity (I never inhaled), I have been invited this time to contribute what they call a “paper”. It will be a paper about the paper – The Irish Times – and O’Nolan’s 26-year stint as columnist Myles na gCopaleen. Or at least I think that’s what it will be about. I suppose I’d better write it soon.

It need hardly be added that the July silence will be disturbed not only in UCD, Newman House, and the Museum of Literature Ireland, the official host venues. There will also be an extensive social programme in the evenings – readings, performances, etc – so no pub in the vicinity of these will be safe either.

Nor is UCD the only university involved. The Dublin outpost of Boston College, on St Stephen’s Green, will have a week-long event, free and open to the public, called “Flanntasmagoria – the ever-widening spiral of Flann O’Brien”.

This combines a travelling exhibit from his archive in BC, notably the typescript of The Third Policeman, with what is billed as an “immersive” art exhibition. Anyone who has read another of O’Brien’s novels, in which the mad scientist De Selby interviews St Augustine in an underwater cave off Dalkey, can be reassured that the exhibition is not that kind of immersive. It’s just an art and video installation. You probably won’t need oxygen.

Separately, and also in quasi-nautical vein, Boston College will be hosting an interview with noted Flanneur, Blindboy Boatclub of the Rubber Bandits. He’s one of several well-known writers who will lend their voices to next week’s conversation, a list that also includes Anne Enright, Patrick McCabe, and Lisa McInerney.

No Flann O’Brien conference would be complete without somebody attempting to answer the immortal question: “Is it about a bicycle?” And sure enough, that’s the title of one of the papers. It may well be unanswerable, but the latest to try – Dieter Fuchs of the University of Vienna – will be investigating it via the angle of “O’Nolan’s poetics of the moebius strip”. So you never know.

Meanwhile, about 80 kilometres north of UCD, as if to tee up his friend, Patrick Kavanagh will this coming weekend be the inspiration of an annual event also involving the theme of two-wheel transport. In another poem, about another July, he once wrote of how “the bicycles go by in twos and threes/[to]a dance in Billy Brennan’s Barn tonight”.

So now, every year, his native Inniskeen hosts a weekend of commemorations to which cycling (perhaps even on the same bicycles – “high-nelly hire available” promise the organisers) is central. There will also be dancing at, or near, the crossroads.

And speaking of same, the programme includes re-enactments of Kavanagh’s Tarry Flynn, a novel inspired by a #metoo event from 1930s Inniskeen, which provoked an emergency mission by the Redemptorists. Hence one of the reenactments: “Salamanca Barney’s sermon on the happenings at Drumnay crossroads”.

Then, back in Dublin next Tuesday at 8pm, by a spooky coincidence, James Joyce will be getting in on the Flann warm-up act. O’Nolan might have had mixed feelings about this one, because more than most Irish writers of his generation, he was haunted by Joyce. And “haunted” may be doubly apt in the context of the Tuesday event, which involves the most famously dead person in Ulysses.

Last month, as usual, enthusiasts in period dress reenacted the funeral of “poor Paddy Dignam” in Glasnevin Cemetery, one of the key events of Bloomsday.

Now, just when normal people thought it was safe to walk the streets of Dublin again, Joyceans are holding Paddy’s first-ever “month’s mind”. This will take place not in a church, but in a strategically located pub, McGeough’s of Doyle’s Corner, formerly Dunphy’s Corner, whose pivotal and sometimes macabre role in Dublin funeral processions of yore will feature in proceedings.