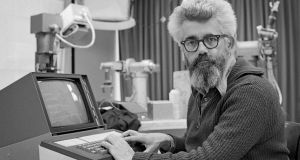 John McCarthy: the story of the computer scientist known as the father of artificial intelligence begins, like the best such stories, with a young man bringing a cow to market. Photograph: AP

Kerry cows have long horns, according to the proverb. But as I learned this week, at least one of them has a long story too – a saga that moves from Killorglin in 1914 to California in the 21st century, and along the way involves the birth of artificial intelligence, the origins of the internet, and a sub-plot involving the Soviet invasion of Czechoslovakia.

It begins, like the best such stories, with a young man bringing a cow to market. Now he didn’t come home with magic beans; he was a Kerryman, after all. He was paid with the usual cash. It was the coming home bit he neglected.

A 19-year-old with itchy feet, John Patrick McCarthy headed instead for Queenstown (now Cobh), and spent the money on a ticket to America.

He did eventually return the price of the cow in remittances. But by the time he himself revisited his native village, Cromane, it was in the company of Ida Glatt, the Lithuanian-Jewish woman who would become his wife.

Back in the US in 1927, she gave birth to a son, also John McCarthy, whose life-long respiratory problems were a factor in their move from the east coast, first in Boston then New York, to Los Angeles. Another factor was the Great Depression, in which they lost their home.

They were a radical couple. The cow salesman was at various times a fisherman, carpenter, and journalist, but he was also an ardent communist (an irony in mid-20th century America, given his surname), and in Los Angeles became an organiser for the Amalgamated Clothing Workers Union. Ida had similar leanings. Her jobs included writing for a communist newspaper.

John Junior, meanwhile, was a bright kid. He graduated from high school two years early and then blazed though university, first at the Californian Institute of Technology (Caltech), where he was also able to skip two years of a maths degree, before doing his PhD in Princeton.

For a time, he shared his parents’ politics, joining a Princeton branch of the Communist Party which had only two other members – a cleaning lady and a gardener. But it was his work on artificial intelligence that would have the most revolutionary influence.

He appears to have been the first person ever to use the term AI, when organising a workshop on computing at Dartmouth College in 1956. “I had to call it something, so I called it ‘Artificial Intelligence’,” he explained decades later. And he didn’t think it original. “I had a vague feeling that I’d heard the phrase before, but in all these years I have never been able to track it down.”

Two years later, he began work on his defining project, the LISP computer programming language, ground-breaking then and still considered among the most influential of all such languages, with multiple dialects including one called “Franz Lisp”.

McCarthy was also a pioneer of computer “time-sharing” systems, without which we would not have the internet.

Amidst his transformation of computing, he underwent personal evolution too.

His youthful communism had influenced a decision to learn Russian. He even taught in the Soviet Union for a time, in Novosibirsk. But he also toured occupied Czechoslovakia in 1968, seeing the “Ivan go home” and “Brezhnev has gone crazy” signs along the roads and meeting locals who re-educated him on the Kremlin’s propaganda.

The experience seems to have cured his communism. He became a conservative Republican in later life and his involvements with the Soviet Union during the 1980s included smuggling a fax/copier machine to the Moscow dissident Larisa Bogoraz, a former Siberian exile.

When McCarthy died in 2011, aged 84, one of the US tributes mentioned his “puckish” sense of humour.

It was an apt adjective. The town of Killorglin, where his father sold the cow, is of course synonymous with pucks – it even has a statue of one.

Maybe now another four-legged animal should be similarly immortalised there.

But in the meantime, Killorglin has acquired a plaque to John McCarthy, unveiled last February by his daughter Susan.

Among the honours showered on McCarthy in life was the 1971 Turing Award, the “Nobel Prize of Computing”, named for Alan Turing, whose connections with Tipperary were the basis of a short television piece I recorded recently in Borrisokane.

Funnily enough, that was shot in the ruins of an old agricultural school, founded by Turing’s grandfather, and was observed by a curious herd of cattle in the adjoining field.

One of our attempted takes was even sabotaged by a loud “moo” at just the wrong moment.

I suspect now that the heckler was trying to tell me something, about an illustrious ancestor from Kerry.