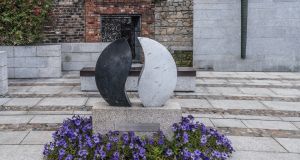 The Garda Memorial Garden at Dublin Castle features a sculpture which is “a tribute to all deceased members” of An Garda, the RIC and the DMP. Photograph: excellentstreetimages.com

The furore over a planned commemoration at Dublin Castle for the Royal Irish Constabulary (RIC) and Dublin Metropolitan Police (DMP), originally meant to take place today, was an eye-opener for many people.

But what many of the more shrill of its opponents seemingly don’t realise is that a garden already exists at Dublin Castle commemorating the RIC, the DMP and An Garda Síochána.

The Garda Memorial Garden was opened in 2010 to honour over 80 members of An Garda killed on duty since its foundation in 1922. It features a specially commissioned stone sculpture which is “a tribute to all deceased members of An Garda Síochána, the Royal Irish Constabulary and the Dublin Metropolitan Police”.

I knew John Morley. He was an armed detective upholding the law when he was shot by paramilitary bank robbers in a shoot-out near Ballaghaderreen in July 1980.

In upholding the law of the land he was not much different to his RIC predecessors. Why are our would-be patriots not protesting at his being remembered at Dublin Castle? It that not their next logical step?

And just as An Garda has not proven perfect in going about its duty, so too with the RIC and DMP. What is indisputable about all three police forces is that they were made up mainly of men from a common background – rural, Catholic, nationalist.

As pointed out recently by Prof Seamus Murphy of Loyola University Chicago, the RIC was described warmly in a 1902 edition of the United Irishman, edited by Arthur Griffith, founder of Sinn Féin.

The article read: “The Royal Irish Constabulary is a body of Irishmen recruited from the Irish people; bone of their bone and flesh of their flesh. The typical young constabularyman is Irish of the Irish; Catholic, and (as the word goes) Nationalist; the son of decent parents; his father a Home Rule farmer . . . his uncle a patriotic priest; his sweetheart the daughter of a local Nationalist district councillor and patriotic publican.

It could have been a describing a Garda in any part of Ireland over the past century.

The conflation of the RIC and DMP, established more than 200 years ago, with the Black and Tans and the Auxiliaries established in 1920, was deliberate and cynical, and seized on by outraged elements in Sinn Féin, Fianna Fáil, Fine Gael, some Independents and Labour.

The extent of their rage, its breadth, but above all its vitriolic depth, was a revelation. It was, frankly, “Tone” deaf. It was purest green nationalism and as removed from the all-embracing republicanism promoted by Wolfe Tone as undiluted nationalism can be. And, let us remember, nationalism is about the tribe alone. It is exclusive, not inclusive. What the controversy released was a lava of emotion erupting from deep within the innards of the State and most of its political parties.

This has one very major significance – it means a united Ireland will not happen within my lifetime, or that of anyone reading these pages, or of anyone living on this island today.

The controversy revealed the green tribe on this island in all its fiercely intolerant conviction and one which will only admit to a myth about itself and its identity, not to the full complexity of our tortured history.

There are tens of thousands of Irish people today who are descendants of RIC and DMP men. (My own family must be among the few that has no such policemen antecedents, on either side.)

Yet the green brigade would have all those Irish people bury the truth of their backgrounds – as they insisted until recently about those many Irishmen who fought in the first and second World Wars – and that it should remain buried in favour of a fictitious history of Ireland.

What unionist would agree to be dominated and ruled by such a green myth? The most moderate unionist would baulk at that. And, of course, the usual suspects among unionists viewed cancellation of the RIC and DMP commemoration with glee.

It was a gift. It confirmed publicly what they have always believed privately, that what is really being pursued by those with a united Ireland agenda is not some new entity but a green nation once again where at best they might be tolerated. It won’t happen. Simple.

No self-respecting unionist among the estimated 800,000 in Northern Ireland would subject themselves, or sacrifice themselves as Britons, to such anti-British rule. And why should they?

1 Coronavirus: One case confirmed in Northern Ireland
2 Orange weather alert issued as Storm Jorge set to batter Ireland
3 Predictions of ‘skin and hair flying’ as FG selects 13 of up to 60 Seanad hopefuls
4 How well paid do you think you are? Here’s how to work it out
5 What should you do if you think you might have coronavirus?
Real news has value SUBSCRIBE