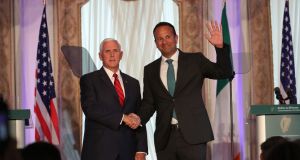 US vice-president Mike Pence has indicated strong backing for the UK and prime minister Boris Johnson in its negotiations with the European Union on Brexit.

Following a lunch meeting with Taoiseach Leo Varadkar during his two-day visit to Ireland, Mr Pence said Ireland and the European Union should “negotiate in good faith with prime minister Johnson and to work to reach an agreement to respect UK sovereignty and minimise disruption to commerce”.

The robust support for Britain had not been expected. For his part Mr Varadkar said the impact that a hard border would have on Ireland would be substantial and “deeply destructive”.

“That is why we must stand our ground on the withdrawal agreement. An agreement which was carefully negotiated to overcome all these risks,” he said.

He asked Mr Pence “to bring the message back to Washington with you”.

However while Mr Pence said that the US recognised the unique challenge with the Border, he emphasised US support for the UK’s decision to leave the EU.

Mr Varadkar said Mr Pence’s visit had come at a critical time in our history, with Brexit less than two months away.

He instanced barriers to trade, movement of people, and the risk to the Belfast Agreement.

“This is not a problem of our making. It is one we want to solve through an orderly Brexit and a withdrawal agreement that guarantees no re-emergence of a hard border on this island.”

Mr Pence leaves Ireland on Wednesday for London where he is expected to meet Mr Johnson.

The vice-president also described his first visit to Ireland in 1981, describing the time he spent in Ireland as a “formative period in my life”.

He also thanked the Irish Government for the role played by Shannon Airport as an “important hub” for the US.

“We are grateful for that Irish hospitality for our troops as they deploy and they come home,” he said.

Cybersecurity was also a focus of the discussion between Mr Varadkar and Mr Pence, said the vice-president. Mr Pence said that allies needed to find 5G alternatives to Huawei, the Chinese telecoms provider which has a strong presence in Ireland.