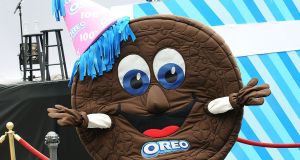 The latest moronic buzzword that threatens to escape from the world of marketing into English – unless we all agree to gang together now and strangle it at birth – is “humaning”, a concept that made its debut appearance in the US only last month.

Its proud parents are Mondeléz International, a company that makes snack-foods including Oreos, and the advertising agency, Ogilvy. In an excited press release, headlined “Announcing Humaning”, the former explained what it involved:

“Humaning is a unique, consumer-centric approach to marketing that creates real, human connections with purpose, moving Mondeléz beyond cautious, data-driven tactics, and uncovering what unites us all. We are no longer marketing to consumers, but creating connections with humans.”

It continues, with a straight face: “Humaning is a natural fit for a company that creates the snacks that form the basis for connections between people all over the world and is a clear manifestation of the Mondeléz International brand purpose to do what is right: leading the future of snacking by offering the right snack, for the right moment, made the right way. With humaning, we will feed the hunger for human connection in everything we do . . .”

Yes reader, even by the standards of the genre, this one takes the biscuit.

Adding to the portentous headline, meanwhile, was the announcement’s date: “November 11, 2020”.

Perhaps they chose the anniversary of Armistice Day deliberately to send this latest product of the marketing trenches over the top into the no-man’s-land of corporate-speak. If so, I hope that despite the ceasefire, it will be exposed to withering fire from the machine guns of public ridicule. Alas I fear that based on all precedent, the term will make it across the barbed wire (and the Atlantic) safely, to turn up soon in boardrooms near you and me.

As if the phrase “I am not a robot”, which we are often required to tick these days when doing business online, were not startling enough, some websites have now also taken to asking customers to “confirm humanity”.

This is the same process, essentially, although it seems to raise bigger philosophical questions of a kind that should hardly arise when you’re ordering, say, cheeses, as was the case in one of the sites where this is used. You might think the very fact of eating cheese would vouch for you being a life form, but apparently not.

By a disturbing coincidence this week, I started reading Dune, Frank Herbert’s science-fiction classic, first published in 1966 although still set in some distant future of inter-planetary travel. And all the main characters so far seem to be humanoid, but in a key early event, a boy who appears destined for greatness is required to prove that he is “human” rather than “animal”.

As explained by the mysterious “Reverend Mother, ” who oversees the test, animals are driven by instinct and base emotion, lacking the ability to rationalise. So the young hero must confirm his humanity not by merely ticking a box, but by putting his hand in one – a magic box that will simulate the effect of the hand being incinerated – and keeping it there until she tells him he can take it out. To supply the basis for rationalisation, in the interim, she is also holding a poisoned needle to his neck, which he knows will bring instant death if he takes his hand out of the box prematurely.

Now more than half a century old, Dune is said to have inspired many other science fiction works since, including Star Wars and The Matrix. And I suppose if 50-plus years of real-life advances in artificial intelligence have resulted in nothing worse than those “reCAPTCHA” boxes (with the weird, distorted numbers and letters that, disconcertingly, being human, you’re never quite sure of), we can’t complain.

Mind you, speaking of complaints, another cuboid form of torture now is the online “chat box” that more and more companies use to minimise interaction with humans, wherein virtual consultants sift your queries – often via a range of “frequently asked questions”, none of which is the question you want to ask, ie: “Why is your service so useless?”

If you’re persistent, you may eventually be referred to a living, breathing assistant. But often this will first involve a lengthy queueing process in which one of your ears is tortured by annoying music, accompanied at brain-fryingly regular intervals by the same recorded voice repeating that your call is important and will be answered soon. Before that happens - and this may be the whole point of such exercises – many of us may prefer to confirm our humanity by hanging up.