Theresa May’s government cracking at the seams on Brexit 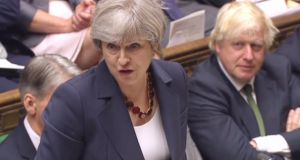 British prime minister Theresa May on Wednesday faces her first parliamentary challenge since a disastrous election, in a vote on whether to maintain unpopular austerity measures. Photograph: AFP/Getty Images

For opponents of a hard Brexit, hooked on hope and schadenfreude as they watch the chaos inside Theresa May’s government, this has been an uplifting week. The highlight came on Tuesday, when chancellor of the exchequer Philip Hammond flew to Berlin to trash his cabinet colleague, foreign secretary Boris Johnson.

Addressing a meeting of Angela Merkel’s Christian Democratic Union, Hammond said he was trying to discourage Johnson’s suggestion that Britain could have its cake and eat it after leaving the European Union.

“The question is not whether to have cake, or eat it, or even who has the largest slice,” he said.

“The question that matters is whether we can be smart enough to work out how to continue collaborating together to keep the cake expanding for the benefit of all.”

The Conservatives campaigned in last month’s election on a policy of leaving the single market and the customs union when Britain leaves the EU. But Hammond suggested to his German audience that Britain could remain in the customs union during a transitional arrangement that could last for up to four years.

Back in London, Brexit secretary David Davis corrected the chancellor, insisting that a transitional period could not last for more than three years. Earlier, Davis contradicted Hammond’s suggestion that Britain could postpone negotiating independent trade deals around the world until after a transitional period.

The public discord exposed the divisions within May’s cabinet over Brexit, as well as her diminished authority. It also highlighted the fact that, following the election, there is no parliamentary majority at Westminster for the prime minister’s vision of a hard Brexit.

The problem is that there is no majority for anything else either.

Both main parties are divided over Brexit and neither can unite around a coherent alternative to May’s proposal that Britain must leave the single market, the customs union and the jurisdiction of the European Court of Justice (ECJ).

On Thursday, 49 Labour rebels backed an amendment to the Queen’s Speech regretting that it did not include proposals for Britain to remain in the single market and the customs union. They joined MPs from the Scottish National Party (SNP), the Liberal Democrats and others, securing just 101 votes, compared to 322 against.

Labour had ordered its MPs to abstain on the amendment and Jeremy Corbyn sacked three frontbenchers who backed it. Labour is not explicitly opposed to membership of the single market and the customs union after Brexit, arguing that institutional arrangements are less important than the outcome in terms of jobs and economic growth.

Labour’s ambiguity reflects the fact that two opposite elements in the party – so-called “moderates” representing traditional working class constituencies in the Midlands and the North, and leftwingers around Corbyn – dislike the single market. The “moderates” want to leave it because they oppose the free movement of people and fear being outflanked on the right over immigration. Corbyn’s circle are relaxed about immigration but are eager to unshackle Britain’s economic policy from the single market’s competition and state-aid rules.

Most Conservatives embraced – or at least accepted – Brexit after last year’s referendum but some have felt their ardour fade as they watched their majorities shrink in the general election. Brexiteers who spent much of the past year crowing about the robust performance of the British economy since the referendum have been chastened by evidence of a slowdown.

The Office of National Statistics said on Friday that the British economy grew by just 0.2 per cent in the first quarter of this year, making it the worst performing major economy in the world and the worst in the EU. Retail sales, house prices and household savings are falling, adding to a general sense of anxiety and gloom following recent terrorist attacks and the Grenfell Tower fire.

Opinion polls show signs of a softening in support for leaving the EU, as more voters say British negotiators should prioritise the economy over immigration. Westminster is paralysed by its own arithmetic, however, with May’s Brexit blueprint still Britain’s policy as negotiations in Brussels continue.

The DUP cannot help here because the Conservatives have bought their votes in support of whatever legislation on Brexit the government chooses to introduce. The EU will not help either, as the uncompromising response from Brussels to May’s proposal on citizens’ rights made clear this week.

Some Remainers who still cherish the hope that Brexit will somehow be reversed were encouraged by Emmanuel Macron’s hint during a press conference with May that the article 50 process could be reversed. Since then, however, he clarified his position in an interview with Le Figaro.

“The door is open until the moment it’s stepped through. It’s not for me to say it’s closed. But as soon as things are embarked on with a timetable and an objective, it’s very difficult to go back – we mustn’t fool ourselves,” he said.

With no salvation at hand from the continent and no majority at Westminster for remaining in the single market by joining the European Economic Area like Norway, the best hope of avoiding a hard Brexit lies in slowing the process down. The Brexiteers in government remained committed to a hard Brexit but they now accept the need for a transitional arrangement lasting between two and four years.

Such an arrangement would avoid a costly economic cliff-edge and effectively extend the exit negotiations while maintaining many current agreements. Such a transition is only possible, however, if the article 50 negotiations reach a satisfactory conclusion by March 2019 – an outcome nobody would bet their house on, no matter how much its value has fallen in the meantime.