Brexiteers only want to be masters of their ‘own little world’ 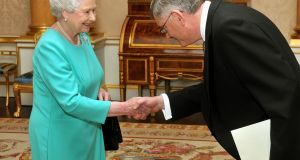 The debate in the United Kingdom about its impending departure from the European Union has been characterised by “xenophobia, insularity and a lack of self-confidence”, a senior Irish Ambassador has said.

Bobby McDonagh, the Irish Ambassador to Italy, said those Brexiteers who had put “country first” were effectively saying they wanted to be “masters of our own little world”.

Speaking to a conference in Rome hosted by the University of Notre Dame, Mr McDonagh said every country wants to “take control” of its own affairs – the mantra used by the Leave campaign in the Brexit debate.

However, the Ambassador, who retires in July, said EU countries believe the best way to take control is to pool sovereignty in those areas such as trade where a collective response is required.

“The European Union remains the most effective cross-border mechanism the world has seen,” he said, adding that it was an “imperfect and extraordinary” organisation and, by definition, complex.

That complexity is one of the reasons why populists “can’t stand the European Union. The European Union is and will always be complex because the simple ways of the past consistently and tragically failed.”

Defending the EU, he suggested, was “one of the great moral imperatives of our day ... if this European Union were to disappear under the onslaught of scepticism or, equally dangerously, burdened by the unrealistic expectations of well-meaning perfectionists, there will be no European Union in its place”.

He contrasted Ireland, which, he said, had embraced the free movement of people whereas those who argued for Brexit believed it was something to be feared.

Mr McDonagh pointed out that the Republic of Ireland had a higher percentage of foreign-born residents than the United Kingdom. According to Eurostat, 16.9 per cent of the population of the Republic was foreign-born as of last year; the equivalent figure for the UK was 13.3 per cent.

Far from being regarded with suspicion, Mr McDonagh said the “new Irish” were being embraced in Ireland because “they build up our economy, enrich our culture, strengthen our sports teams, fill our churches and our mosques, diversify our tastes and make us proud to be Europeans”.

Mr McDonagh, who will be 63 next week, will be retiring as a diplomat when he leaves his post as Ambassador to Italy at the end of July. Prior to taking up that post, he was ambassador to Britain between 2009 and 2013.

He referenced Nigel Farage’s comments that June 23rd last year was Britain’s “independence day” and said the notion that only Britain cared about its independence was “plain silly”.

“It reaches the level of unprecedented historical amnesia that any British person might believe that Ireland needs to be reminded of the importance of independence.”

In a wide-ranging speech, Mr McDonagh said Ireland and Britain see EU membership in fundamentally different ways as reflected in the fact that 86 per cent of Irish people regard EU membership as a good thing.

“Ireland’s continued commitment to Europe is, in my view, an important further step in the assertion of Ireland’s psychological independence,” he said.

“As a small island dominated for so long, both before and after independence, our accession to the EU provided us, to a greater extent than before, with a wider international stage.”

Brexiteers, he maintained, treat independence as a “delicate flame to be hidden away in a sacred temple”; whereas the Irish regarded their independence as “something which defines our very place in, and interaction with, the wider world”.

“Ireland, in common with Italy, our EU partners, view sovereignty in the 21st century as something to be shared, appropriately and effectively.”