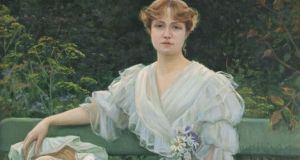 A newspaper produced entirely by women and intended to be read by women was launched in France in 1897. La Fronde (“The Sling”) was revolutionary. It strove for equality between the sexes and is reputed to have been the world’s first feminist newspaper.

The idea came from Marguerite Durand. Formerly an actress with La Comédie-Française, she worked as a journalist with Le Figaro, where she created its “letters to the editor” section.

She said the notion to start a newspaper for women came to her when she was sent to report on the International Congress of Women in 1896.

The plan was that she would write a funny mocking piece of reportage about those gathered there and their ideals, but Durand came back with a changed mindset.

She admired the articulate women who put forward proposals about education and politics.

Durand launched a nationwide publicity campaign in the autumn of 1897, recruiting trailblazing women who had distinguished themselves in their professions. Women such as Jeanne Chauvin, the first woman admitted to the bar in Paris, and Blanche Galien, the first female pharmacist in France.

Up to this point, the few women that worked as journalists in France wrote for what was called “the feminine press” or publications for children. Most of the newspapers and periodicals destined to be read by women dealt mainly with fashion. Women were obviously not supposed to be interested in what was covered by the broadsheets.

Séverine was one of the most well-known journalists who worked on the paper. She said that rather than practise “sitting down journalism”, as she referred to the old style of news gathering, La Fronde would do”‘stand-up journalism”, getting out and about to report on life as it was lived by the people.

This was a paradigm shift. In 19th-century France, nearly every activity outside the home was considered suspect or even shameful for a middle-class single woman.

All of a sudden, female journalists were being sent to report from bastions of male privilege such as the stock exchange, the law courts, the parliament and senate or the Élysée Palace. In many cases, it was the first time that a female journalist had obtained permission to enter such places.

Because of the way it went about its business, La Fronde soon came to be seen as a trustworthy paper, equal in production values and as reliable as anything else that was available from the news kiosk at the time. It even gained the nickname, “Le Temps in petticoats” (Le Temps was a paper of record of the period). While sales of the newspaper took off in France, reaching 50,000 in 1898, it also caught the attention of observers around the world.

One American newspaper marvelled at how La Fronde was “written, edited, printed, folded, distributed, and sold exclusively by women”.

Meanwhile in Ireland, a newspaper quipped that “the only representative of the other sex is a small boy who opens and shuts up the premises, sweeps the entrance floor, calls cabs, and delivers parcels rather beyond the power of his lady employers”.

Durand insisted that the women were paid the same wage as their male counterparts in similar newspapers. In her editorials, she spoke out against the corset and pleaded in favour of divorce by mutual consent and women’s suffrage.

She was a democrat who lent her voice to minorities, siding with the Jewish army officer who was falsely convicted and imprisoned on espionage charges, Alfred Dreyfus. She also took an anticolonial stance, long before it was popular.

The newspaper continued as a daily up until 1903. It then became a monthly until 1905, when it ceased publication. It was subsequently revived twice; once in 1914 and again in 1926. However, it did not manage to survive due to financial difficulties, but it was also perhaps a little ahead of its time.

After more than 40 years in the vanguard of the feminist movement, Durand decided to pass the torch on to the next generation.

In 1931, she gave her library to the city of Paris. At the time, it contained 10,000 volumes documenting the history of women through the ages. It also included engravings, portraits and documents relating to female religious orders, among other items.

Today, it contains 45,000 items and is the sole public library in France that is dedicated to the history of women, feminism, and in latter years, gender studies.

The library was recently renovated and, after being closed to the public for a number of years, is open again.

It stands as a testament to the pioneering work of Marguerite Durand and her colleagues who showed that a woman could make just as good a journalist as a man.