The vulnerable must be protected from bogus cancer cures 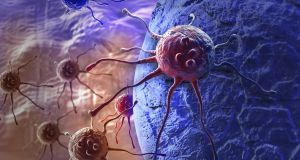 An image of a cancer cell. ‘Of the 20 most shared cancer articles on Facebook in 2016, more than half consisted of claims that were medically discredited.’

There are few things with quite the emotional resonance cancer invokes. Virtually every one of us has lost loved ones to this scourge, leaving no one untouched by its terrible scope. Despite its ubiquity, misinformation about cancer abounds. The thriving market for bogus “cures” is perhaps the most damning aspect of this.

It’s crucial to understand the scope of the problem. Few of us think about cancer until we’re confronted with it – either ourselves, or when it afflicts someone we love. Quite reasonably, this is usually when people seek information online. But here, myths proliferate rapidly, often eclipsing reliable information. This is especially true of social media; of the 20 most shared cancer articles on Facebook in 2016, more than half consisted of claims that were medically discredited, which proved no impediment to their propagation. We are not adept at differentiating dubious sources from reputable ones – faced with a storm of claims it’s completely understandable that patients are frequently misled.

Health itself is a big business, and new patients are accosted online with promises of miracle cures. This has become so common that practically all patients have encountered it, with Cancer Research UK, the Irish Cancer Society and the US National Cancer Institute identifying this as a major and growing problem. This leaves oncologists, cancer scientists and nurses fighting an uphill battle to combat bogus cancer claims. As the Lancet Oncology noted in an editorial last year, “How has society got to this point, where unproven interventions are being chosen in preference to evidence-based, effective treatments? Unfortunately, disinformation and – frankly – lies are propagated widely and with the same magnitude as verified evidence.”

Some of the problem stems from misunderstanding. Cancer isn’t one monolithic disease, but an entire family of more than 200 known maladies, all characterised by abnormal, unregulated cell growth. There are wildly varying prognoses and treatment options between different types. More than this, cancer stems from mutations in a patient’s own cells, rendering every cancer as unique as the person enduring it. Depending on stage and type, some cancers might be treatable by surgery, radiotherapy, chemotherapy or even immunotherapy. Others, sadly, mightn’t respond at all. Interventions that work for one cancer type are often completely unsuited to another. Cancer is a staggeringly complex phenomenon; the idea of a universal “magic bullet” that treats all its myriad forms is alluring but woefully misguided.

This reality hasn’t stopped a litany of ostensible cancer cures being marketed to vulnerable people. These encompass everything from cannabis oil to shark fins, reiki to magnets, ketogenic diets to vitamin regimes. The US Food and Drug Administration’s non-exhaustive list of debunked cancer cures currently numbers over 187 items to date. The only thing these items have in common is that they have zero efficacy for cancer. What’s more, many of these interventions can actively do harm; a study in JAMA Oncology last year found that patients who invested in alternative medicine were far more likely to refuse or delay effective treatment. This unfortunately resulted in them being twice as likely to die within five years of diagnosis as patients who stuck to conventional medicine.

While there is no shortage of charlatans hawking fake cures, many of those promoting dubious therapies truly believe their wares are effective. They might mean well, but true believers have equally devastating impact on patients. As the old adage reminds us, the road to hell is paved with good intentions. Breathless anecdotes and personal conviction are no substitute for scientific and medical evidence. In a perverse twist, believers frequently become convinced that their particular “cure” is being suppressed by the scientific and medical establishment in an overarching “big pharma” conspiracy. An estimated 37 per cent of Americans, for example, believe the FDA is suppressing “natural” cancer cures, an idea exacerbated by alternative gurus who blithely dismiss conventional treatment as a racket.

The problem of how we combat misinformation is an overwhelming one

This claim is as damaging as it is outlandish, ultimately fostering distrust between patients and doctors. In 2017, when work on the Bill began (full disclosure: I have advised on it since the beginning), O’Connell noted the unprecedented animosity it drew from some quarters. This echoes my own experiences, and the deluge of accusations and vitriol have flowed into my inbox since then. To true believers, the motivation behind the Bill is to suppress cures for cancer at the behest of pharmaceutical companies – a conspiracy in which they believe physicians and scientists in cancer research are complicit.

This is so much nonsense; were there some simple cure for cancer, the scientific and medical community would embrace it wholeheartedly. Conspiracy theorists fail to realise that those of us who work in the cancer sphere are every bit as affected by it as anyone else. Were we privy to some hidden cure, none of us would ever have to watch someone we love die, powerless to do anything. And yet, this is universal. To square that circle, conspiracy theorists simply assert scientists and physicians are either heartless or stupid, dismissing the reality that those who choose this field strive to improve outcomes, so that fewer people must suffer. To accept the conspiracy narrative simply drives a wedge between patients and their healthcare team, benefiting only those who peddle false hope.

To prevent patients being exploited by dangerous and expensive snake oil, a robust approach is imperative – giving the Health Products Regulatory Authority the authority to investigate medical claims is an important part of this. The Bill also brings us in line with countries such as the UK, where false advertising on cancer cures has been illegal since 1939. The problem of how we combat misinformation is an overwhelming one, and it would be foolish to see this Bill as a panacea to this all-consuming question. But it is an important start that offers patients some protection – something that should be commended.

1 Sideline Cut: Vignette shows why Bird is the true shark in The Last Dance
2 Irish tourists excluded from visiting Greece and Croatia
3 ‘Wiggle like a snake, waddle like a duck’: Hucklebuck singer Brendan Bowyer dies at 81
4 We need to pay very close attention to what is happening in Britain now
5 ‘I’m so lucky to be in the Caribbean – a million miles from Derry Girls’
Real news has value SUBSCRIBE