The Irish Times view on the mayoral plebiscite: Where is the detail?

Voters in Cork, Limerick and Waterford are to go to the polls without important information 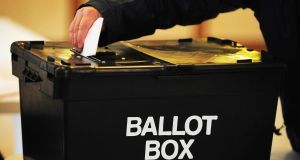 Voters in Cork, Limerick and Waterford are to go to the polls without important information. File photograph: Rui Vieira/PA Wire

The idea of directly elected mayors with executive powers has been under discussion for more than a decade. It almost came to fruition five years ago in Dublin before the then coalition government played a divide and conquer card and allowed Fingal county councillors to stymie the development. A Citizens’ Assembly will reconsider the matter this year. In the meantime, voters from the development hubs of Cork, Limerick and Waterford will be asked to support the proposal in a plebiscite on May 24th.

Minister of State for Local Government John Paul Phelan is in charge of the scheme, rather than his boss, Eoghan Murphy. Recent actions by senior Ministers to amend his plan by dropping Galway from the initiative and cutting the salaries of elected mayors by €36,000 emphasised its lowly status. In opening Fine Gael’s local election campaign, however, Taoiseach Leo Varadkar said directly elected mayors would provide the cities with clout when they approached the Government for funding. He went on to defend the delay in releasing information about the role and powers of directly elected mayors.

There are worrying similarities between these plebiscites for directly elected mayors and the terms of the Brexit referendum. As with the Brexit exercise, the electorate is being asked to answer a simple Yes or No to a question in the absence of important detail. The department advises that directly elected mayors will perform a “significant amount” of the executive functions reserved for chief executive officers. But this “significant amount” is never quantified.

On the basis of six suggested functions, the role is likely to be supervisory and representational. Taking back control from unelected officials or facilitating the emergence of a powerful local politician is not on the official agenda. Because of a commitment in its programme for government, this plebiscite offers Fine Gael something of a fig leaf. If approved, directly elected mayors will be able to propose budgets and development plans and make representations to government. But decision-making will remain with chief executives.