Man walks into a bar and hands Boris Johnson a majority 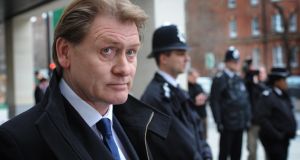 “Don’t blame me for Brexit because I headbutted a Tory”. Eric Joyce MP leaves City of Westminster Magistrates Court in London on March 9, 2012today where he was spared jail for beating up four politicians while drunk and telling police “You can’t touch me, I’m an MP” : Stefan Rousseau/PA Wire

If British politics has been a bad joke for the last three years, there’s comfort of sorts to be taken by the fact that it literally started with a man walking into the bar.

The bar in question was the Stranger’s Bar in the House of Commons and the man who walked into it on the evening of February 22, 2012, was the then Labour Party MP, Eric Joyce.

By his own admission, Eric Joyce was fond of the drink. But on that particular February evening that fondness escalated to the point where Joyce became, in his own words, “absolutely hammered”.

So hammered in fact that at one stage he stood up on a chair and announced loudly to all present that “this bar is full of f**king Tories”. He then proceeded to headbutt a Tory MP and land a few punches on various other Conservatives who were in the bar.

Such an act of drunken thuggery had severe consequences. One of these consequences was almost certainly the election of Jeremy Corbyn as leader of the Labour Party. Another was quite possibly the UK leaving the European Union.

Eric Joyce MP was swiftly suspended by the Labour Party for his actions in the Stranger’s Bar that night and plans were drawn up to select a new candidate to contest his Falkirk seat for the next general election.

As a result of the row , then Labour leader, Ed Miliband, intervened. The Labour Party leader had always been elected by an electoral college composed of parliamentarians, trade unionists and party members - with each block having one third of the overall vote.

Miliband brought in a new system - a simple one person, one vote process. On announcing this significant change, he also introduced a “discount” offer: any member of the British public who wanted to become a voting member of the Labour Party with a real say over who would become the next leader could do so for the knock-down price of £3.

More than 140,000 people took advantage of this basement bargain deal and when Miliband lost the 2015 General Election and the Labour Party were selecting a new leader, 84per cent of these new “3 Quid members” voted for Jeremy Corbyn to be the new party leader.

Before the rule change, Corbyn was a perennial 100/1 outsider to become the next Labour leader.

All credible surveys find that over 90per cent of Labour Party members support remaining in the EU.

The “3 Quidders” - as they are now known - were responsible for electing a Labour Party leader who has been as consistently hostile to the EU as any member of the European Research Group and who had to be dragged kicking and screaming to a “neutral” position during this December election in the face of electoral wipeout.

In its totality then, the theory of a man walking into a bar and Brexit ensuing has a measure of credibility. Not only did Corbyn refuse to put up any meaningful argument to Britain remaining in the EU during the 2016 referendum but his equivocation on the issue ever since is a very significant factor in this morning’s news that the Labour Party have had their worst electoral result since 1935 and Boris Johnson has a clear majority to “get Brexit done”.

The events of the evening of February 22 2012 and their role in the rise of Corbyn, the Brexit vote and the general political turbulence being experienced in Britain ever since are still vigorously debated in the Palace of Westminster - fittingly enough usually over subsidised pints in various House of Commons bars.

As for Eric Joyce himself? He is well aware of all the talk that his drunkenness is being seen as the butterfly effect that set Britain on a course for leaving the EU.

But in a quote that surely rivals anything said by Churchill, Attlee or Bevan in the annals of British political history, he says “Don’t blame me for Brexit because I headbutted a Tory”.

1 Mother of McGinley children who were found dead is arrested
2 Miriam Lord: Sinn Féin goes arthouse for Everybody Can Have Everything manifesto
3 Election 2020 fact check: Do banks in Ireland pay no tax?
4 ‘In Ballyhaunis there were Arab people all around me’
5 Woman who gave birth on Dublin street remains in hospital
Real news has value SUBSCRIBE