‘I know, I know, it is a bit further than 20km but it is our first trip anywhere for months’ 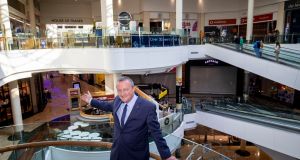 Dundrum Town Centre manager Don Nugent: ‘I feel almost as if we are opening for the first time.’ Photograph: Tom Honan/The Irish Times. 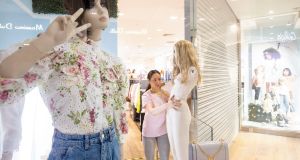 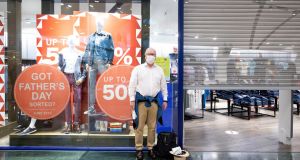 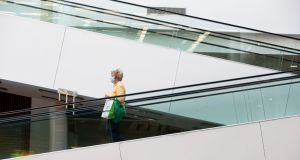 There was guilt and giddy excitement in equal measure in the gleaming glass halls of the Dundrum Town Centre as it opened its doors to shoppers almost two months earlier than planned under the original lockdown roadmap.

“It is great to be out,” said Liz as she stood in a fast moving queue outside Zara. She and her family had travelled up to Dublin from Portarlington, she added, before stopping herself, her face behind the blue surgical mask wracked with something which may have been guilt.

“I know, I know, it is a bit further than 20km but it is our first trip anywhere for months,” she pleaded.

And what was she in the market for?

As she stood chatting with her daughters, her husband stood silently by their side, weighed down by four large cardboard boxes. “I’m just the pack horse,” he said wryly from behind his face mask.

“A courier came down our drive last week and said: ‘Can I just say thank you to your wife for keeping us in business’,” the pack horse added.

Just then, his family were beckoned into the shop by a cheery man in an almost fluorescent white hoody and loud check trousers that displayed his ankles and most of his calves.

It was exactly 10am and as Zara opened, the staff, all of whom were wearing a mixture of blue and black face masks, applauded the shoppers as they filed past. “Hi, how are you, thanks for waiting,” said the check-trousered greeter to everyone who walked past.

The queue was gone within minutes. It took longer for the queue outside House of Fraser to disappear. That retailer itself will have disappeared entirely from the Dundrum landscape within weeks.

Posters in the windows advertised a closing down sale and people were drawn to it.

“I’m thrilled it is open,” said a woman from Churchtown, who asked to be identified only by her first name, Joan. “I came here on the day of the lockdown and they had so many bargains, so I’m back for more,” she said. “My haul will make for great Christmas presents. I am going to get shirts, candles and other bits and pieces. When I am invited to someone’s house, I bring presents when other people bring wine. The presents last longer.”

By the time House of Fraser opened on the dot of 10.30am, the queue had swelled to about 80 and snaked past five or six other retail outlets including a Nespresso concession in which all the staff were wearing face masks and plastic visors.

Few people in the well-marshalled and well-disciplined queue were wearing face masks or covering of any sort.

“I have a face mask in the car,” said Karen O’Callaghan from Sandyford who was in the market for running gear. “I have a House of Fraser voucher and want to get rid of it, so I will be in and out.”

Behind her was Margaret Hopkins from Rathfarnham. She wasn’t happy. She did have a mask on.

“I wouldn’t go anywhere without it,” she said. “I think it should be mandatory. Everyone should be wearing the masks I’m protecting you but you’re not protecting me,” she added, within earshot of fellow shoppers.

Any awkward silence which may have ensued was broken by the sound of the doors opening.

There was no clapping among the House of Fraser staff, all of whom were painfully aware that their remaining time on the shop floor was short.

The Eason shop also reopened and John Power wandered out dismayed that there were no magazines for sale.

“I don’t think they want people leafing through them,” he said, slightly miffed that his plan to buy the Phoenix had come undone.

“I did get a book on the arms trial so it wasn’t an entirely wasted journey,” he said. “And yes, I know we should be wearing masks in places like this and believe it or not I have one in the car.”

It was surprisingly easy to believe.

The “I have my mask in the car” was a familiar refrain throughout the morning. One woman said she had her mask in her pocket. “I know, I know, I should have the mask on,” she said wearily. “I had it on earlier but it’s just so hot and I was sweating, I thought I was going to collapse.”

Centre manager Don Nugent said they were encouraging shoppers and staff to wear face coverings but were following official advice and would not make them mandatory unless the advice changed.

He was pleased with the opening and the level of planning that had been put in place to keep shoppers and staff safe.

“It’s a good day, it’s an exciting day,” he said. “Honestly, I feel almost as if we are opening for the first time. Mind you we never actually closed because Boots and Tesco and Marks & Spencer’s food hall were open all the way through.

“But it was eerie here for a long time. It was great to see a buzz about the place last week as shops got ready to reopen. Being able to reopen eight weeks earlier than expected will make a big difference to a lot of retailers here and it’s also good for customers”

The centre has installed a sort of one-way system outside the shops with people encouraged by arrows to stick to one side or the other depending on their direction of travel. In the early stages of the reopening it was being largely ignored by shoppers.

The social-distancing signs and reminders were harder to ignore. They were everywhere and had the echoes of monotonous Mind the Gap reminders so synonymous with the London Tube except instead of the gap people were being told to mind themselves.