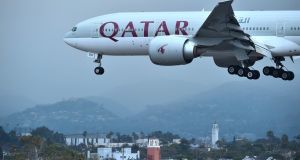 Qatar Airways is cutting the salaries of some pilots and will make others redundant to help reduce costs and soften the impact of Covid-19.

The basic pay of two senior pilot grades will be reduced by a quarter, while junior aviators will face 15 per cent decreases, according to a letter sent to pilots by the company. The measures will not apply to Qatari nationals.

The state-owned carrier said last month it needed to cut 20 per cent of its workforce to adapt to reduced demand following the coronavirus outbreak, which prompted most governments to close borders and order people to stay at home. Flight-deck crew will be included in the plan, with captains and cadet pilots alike to be impacted.

The airline employs more than 46,000 people, according to its website, meaning the layoffs could affect 9,200 workers.

Carriers around the world have embarked on similar plans, with regional rival Emirates looking at reducing headcount by about 30,000, it has been reported. A spokesman for Qatar Airways declined to comment on the letter to pilots.

The Qatar Airways plan echoes a similar initiative by its government owner, which last week told state-funded entities to cut spending on non-Qatari wages to help shore up finances.

Gulf nations have been hit by a double whammy of virus-related economic downturns and a fall in energy prices, reducing income from exports. – Bloomberg