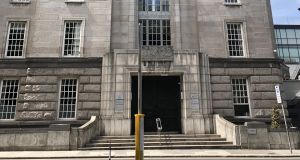 The Department of Enterprise, Trade, and Employment on Kildare Street, Dublin.

It’s always a risk in Dublin, wherever you are. But while loitering on a pavement near Leinster House recently, as I have only since realised, I was standing in the footsteps of James Joyce. Or at least I was standing where his alter ego stood when, as described in A Portrait of the Artist as a Young Man, he found himself irritated by a view from across the street:“Stephen walked on alone and out into the quiet of Kildare Street opposite Maples Hotel he stood to wait, patient again. The name of the hotel, a colourless polished wood, and its colourless front stung him like a glance of polite disdain.

“He stared angrily back at the softly-lit drawing room […] in which he imagined the sleek lives of the patricians of Ireland housed in calm. They thought of army commissions and land agents: peasants greeted them along the roads in the country; they knew the names of certain French dishes and gave orders to jarvies in high-pitched provincial voices . . . ”

Well, a century and more later, Maple’s Hotel is long gone from the spot Joyce was staring at then.

But the patricians of Ireland – a few of them, anyway – may still be on site. Because when you gaze across Kildare Street there now, you see the headquarters of the Department of Enterprise, Trade, and Employment, now presided over by Leo Varadkar.

It’s one the finest buildings constructed in Dublin since independence, although I had never stopped to appreciate it until last week, when encouraged to do so by Arran (the two-r guide) Henderson during an architecture-themed walk.

The exterior is an expression of Free State optimism, circa the late 1930s, designed by a Cork Architect James Boyd-Barrett (there’s a surname I’ve heard somewhere else in Kildare Street, I’m sure), when Sean Lemass was minister. But it was to be built in difficult times – between 1939 and 1942, when Lemass had been tasked with a new wartime role, Minister for Supplies.

A measure of the challenges he and the architect faced is that when the building was otherwise ready for occupation in late 1942, a front-page feature in this newspaper carried the headline: “Eighty Feet High But No Lift”.

The offices had almost every modern amenity, said the story, except the elevator shafts were empty.

Lifts could not be imported and there were none to be had here.

The paper also suggested there would be strong competition between the 600 civil servants over who got to occupy the “palatial” building’s top floor.

If so, aspirants for such high office must have had to prove their ambition by climbing the stairs.

Now as then, the outstanding exterior feature is a giant window that stretches five storeys above the main doors.  If Ireland has a real window of opportunity to match the one of endless cliché, it must be this one.

But the building’s spirit is also visible in smaller details, especially the frieze designs, which look back to Ireland’s history of navigation (via St Brendan) and forward to the era of air travel.

The aviation one looks like something from Soviet propaganda, except that it depicts the Celtic god Lugh launching a fleet of aeroplanes.

In another dramatic departure, the friezes were carved by sculptor Gabriel Hayes, who despite the first name, was a woman, causing something of a media sensation then.

But my favourite detail concerns the female head, representing Éire, that overlooks the great window. She is said to have been modelled on the mother of Peter Barry, of Cork tea empire and Fine Gael fame.

None of this could have been imagined by a student James Joyce when his fictionalised self stood glowering at the drawing room of Maple’s Hotel.

Even so, in his own way, he was making big plans for patrician Ireland’s future. The passage continues: “How could he hit their conscience or how cast his shadow of the imaginations of their daughters, before their squires begat upon them, that they might breed a race less ignoble than their own?”

Joyce soon afterwards went into exile to forge (in the smithy of his soul) the “uncreated conscience” of said race. But the annoying calm in which he saw the hotel patrons housed was not to last for long.

First came the Great War, during which the British army commandeered the premises. Then one night in early 1919, a fire broke out and burned the building to the ground. That was only two years after the publication of A Portrait of the Artist, although I am not for a moment suggesting the events were connected.

1 Former solicitors ran an ‘identity factory’ in committing fraud – court told
2 Cork shootings: Gardaí investigate whether attack was planned by two of the deceased
3 Ciara Kelly: I was pregnant, unmarried, a junior doctor and I got old-school comments
4 Kanturk farm shootings: A timeline
5 Róisín Ingle: Five small ways to find joy in a pandemic. Only one of them is illegal
Real news has value SUBSCRIBE