The civil war in the Catholic Church breaks into the open

Pope Francis says that his recent trip to Ireland was marked by "great joy," in addition to the "pain and bitterness" felt due to historic abuse by members of the Catholic clergy. Video: Reuters 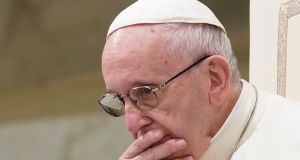 When Pope Francis left Dublin last Sunday he flew into a gathering storm. The former papal nuncio to Washington Archbishop Carlo Maria Vigano had issued a statement calling on him to resign.

[Vigano’s statement] was intended as the Exocet that would cripple and, in time, bring [the pope] down.

Archbishop Vigano’s 11-page statement, issued in the middle of Pope Francis’s visit to Ireland which was already dominated by the church’s handling of clerical sex abuse allegations, was not spontaneous.

It was prepared and with intent. The timing suggested one clear aim – to do maximum damage to Pope Francis. It was intended as the Exocet that would cripple and, in time, bring him down.

That the person launching this missile is someone who operated at the very centre of the church’s administration illustrates vividly the depths of bitterness to which the current moral civil war between conservative and liberals in the Catholic Church has now descended.

It is at the no-holds-barred stage. For instance, Archbishop Vigano claims that former Vatican secretary of state Cardinal Tarcisio Bertone “had no difficulty in insistently presenting for the episcopate [bishops] candidates known to be active homosexuals”.

He accuses named members of the Roman Curia of belonging “to the homosexual current in favour of subverting Catholic doctrine on homosexuality”. Also included, he said, were named cardinals who “belong to the same current, albeit with a different ideology. Others belonging to this current even reside at the Domus Sanctae Martha,” he said. It is the guest house where Pope Francis resides.

He accuses current Archbishop of Washington Donald Wuerl, criticised in the recent Pennsylvania grand jury report, of issuing statements recently that were “absolutely laughable. The cardinal lies shamelessly and prevails upon his chancellor, Msgr Antonicelli, to lie as well,” he said.

Clearly restraint is not part of this professional diplomat’s armoury. From Varese in northern Italy, Archbishop Vigano was ordained in 1968. He entered the Vatican diplomatic corps in 1973 and served in Britain and Iraq before joining the Vatican secretariat of state in 1978.

In 1989, he was appointed Vatican permanent observer at the Council of Europe in Strasbourg. He was ordained Archbishop by Pope John Paul in 1992 and appointed papal nuncio to Nigeria.

In 2009, he became secretary general of the governorate at the Vatican City State. In October 2011, he unsuccessfully resisted being appointed papal nuncio to the US, even though he asked Pope Benedict that he be allowed stay on in his then Vatican role.

In January 2012, Italian media published letters written to Pope Benedict and secretary of state Cardinal Bertone by Archbishop Viganò complaining of corruption in Vatican finances and a campaign of defamation against himself.

It was followed by a statement from the governorate of the Vatican which said “the unauthorised publication of two letters of Archbishop Carlo Maria Viganò” was “a source of great bitterness”.

Assertions in the letters, it said, were “the result of erroneous assessments, or fears based on unsubstantiated evidence, even openly contradicted by the main characters invoked as witnesses”.

On reaching the age of 75 in January 2016, Archbishop Vigano submitted his resignation, as required. It was accepted by Pope Francis in April 2016.

Allowing for Archbishop Vigano’s many possible motivations he does raise many serious matters in his statement and that will have to be addressed by Pope Francis at some stage.

For instance, he claimed the Vatican had been informed as far back as 2000 about McCarrick’s “gravely immoral behaviour with seminarians and priests” by then papal nuncio to the US archbishop Gabriel Montalvo.

He accused three Vatican secretaries of state – Cardinal Angelo Sodano, Cardinal Tarcisio Bertone and Cardinal Pietro Parolin – of knowing about Archbishop McCarrick’s behaviour and doing nothing about it.

He said that in 2009 or 2010 Pope Benedict placed restrictions on Archbishop McCarrick’s public ministry, which he ignored, but which Archbishop Vigano alleged in the statement Pope Francis later lifted.

Archbishop Vigano also said that in June 2013, he told Pope Francis Archbishop McCarrick was “a serial predator”. He claimed Cardinal Wuerl had long been aware of Archbishop McCarrick’s serial harassment of seminarians, a claim he also makes against a series of named cardinals in the Roman Curia.

He has called on all to resign, too.

President of the US Conference of Catholic Bishops Cardinal Daniel DiNardo said questions raised in the statement “deserve answers that are conclusive and based on evidence”.

Without such answers, “innocent men may be tainted by false accusations and the guilty may be left to repeat the sins of the past”, he said.

For his part, commenting on the statement to journalists last Sunday night as he flew back to Rome from Dublin, Pope Francis would not comment except to say “read the statement carefully and make your own judgment”. He added: “When some time passes and you have drawn your conclusions, I may speak.” He should.