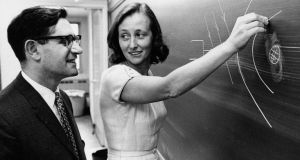 Cathleen Morawetz Synge: first woman to receive the US National Medal of Science

As a famous 20th-century mathematician who was also a 20th-century mother, the late Cathleen Synge Morawetz was often asked a question that her male counterparts were not.

In a 1979 interview with the journal Science, she recalled that when the children had been small, people regularly inquired whether she worried about them while at work. Her reply, widely quoted in obituaries last week, after she died aged 94, turned the tables. “No,” she would say, “I’m much more likely to worry about a theorem when I’m with my children.”

The kids seem to have turned out all right anyway. The theorems certainly did.  Having launched her illustrious career with a PhD on the subject of imploding shockwaves – “Contracting Spherical Shocks Treated by a Perturbation Method” – she was thereafter a leading authority on such subjects as the behaviour of air around fast-moving aircraft wings.

One of her defining discoveries was that the behaviour of supersonic airflows made the search for shock-proof airfoils futile. Her proof of the theory was described by one contemporary as “beautiful”.

For this and other things, she became in 1995 only the second woman ever elected president of the American Mathematical Society and, three years later, the first to receive the US National Medal of Science.

She had, it is true, a very privileged background. Ancestrally it was Irish, as the Synge part of her name hints, although she herself was born Canadian, in Toronto in 1923, and did not follow her emigrant father home when he returned there in the late 1940s to work alongside Erwin Schrödinger et al at the Dublin Institute for Advanced Studies (DIAS).

John Lighton Synge was in his own right probably the greatest mathematician produced by 20th-century Ireland.

He was one of the first physicists to study black holes, but more generally is remembered for his decades of work on the geometry of Einstein’s theory of relativity.

Einstein was a major preoccupation in DIAS, a remarkable body set up by Éamon de Valera to probe the parallel universes of Celtic Studies and Cosmic Physics.

It has been calculated that, during Lighton Synge’s time there, some 12 per cent of the world’s relativity specialists worked in Dublin. And in a 1992 lecture in his honour, it was said that “the other 88 per cent” has been deeply influenced by JL Synge.

But the extended Synge family are a case study in another kind of relativity: genetic. Among Cathleen’s many notable forebears was an uncle, Edward Hutchinson Synge, who although he never graduated from Trinity, is now considered a pioneer in optics.

An earlier ancestor, the 18th-century Anglican bishop Hugh Hamilton, was also a renowned mathematician and physicist. And in more recent times, the clan includes a Liverpool-born cousin, Richard Laurence Millington Synge, who won the 1952 Nobel Prize for Chemistry.

Despite all these scientific geniuses in the family tree, however, the most celebrated Synge – at least in Ireland – remains the writer, John Millington.

An uncle of JL, and therefore grand-uncle to Cathleen, JM Synge also benefitted from the rarefied education that was a family birthright, studying at Trinity and the Sorbonne, among other places.

But a crucial part of his schooling, as he would later claim, was received through a crack in the floor of an old house in Wicklow where he stayed as a young writer. That allowed him to “hear what was being said by the servant girls in the kitchen”, he recalled.

In contrast with the career of his grandniece, the waves that dominated JM Synge’s career were the ones lapping around the coast of Ireland’s wild west, while the main wings of his acquaintance were the ones in which a nervous WB Yeats sometimes stood.

But in his own way, Synge knew a bit about the perturbation method, and he did conduct at least one famous experiment in shockwave mechanics when his mention of female undergarments – “shifts” – set off the Abbey Theatre Riots of 1907.

Getting back to Cathleen, it should be noted that the mathematical genes were not confined to her father’s side of the family. Her mother, Elizabeth Allen, was also a maths student at college, before giving up the vocation for marriage. She later encouraged her daughter’s career ambitions, even after Cathleen became the wife of Herbert Morowetz, a chemist, in her early 20s.

The Synge name aside, meanwhile, there remain some other echoes of the paternal inheritance.

Of the four children Cathleen used to be asked about all the time, one is now a Rubinstein by marriage. More significantly for Irish readers, her first name is Pegeen.

1 Level 5 latest: Gardaí to be given new powers to fine people for holding house parties
2 Life under Level 5: What will the next six weeks look like for the State?
3 Level 5 Covid support bubbles: Everything you need to know
4 Covid-19: State moves to Level 5 for six weeks with hopes of ‘meaningful’ Christmas celebrations
5 Much of what we think about Covid-19 is wrong. We need to change the conversation
Real news has value SUBSCRIBE