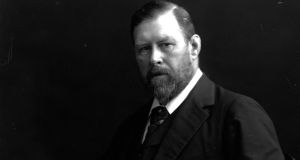 Bram Stoker is said to have acquired some of his ideas about vampires from the Scottish-born writer Emily Gerard, and particularly her essay on “Transylvanian Superstitions”.

She it was, for example, who mentioned that in Romanian tradition the undead could be killed only by driving stakes through their hearts or, in extreme cases, cutting off their heads and stuffing garlic in the mouths.

But Stoker didn’t have to go to Transylvania, or even Scotland, to hear about ghoulish burial customs. Perhaps only the garlic may have been a necessary foreign import. Much of the rest was under his nose in 19th-century Dublin, requiring only minor embellishment.

In his neighbouring northside enclave of Ballybough, for example, there had until fairly recent times been an unconsecrated burial plot set aside for criminals and suicides. With vampiric resonance, it was even located at a crossroads: where Ballybough meets Clonliffe Road. And the tradition had been to bury people there, staked down, lest their troubled souls go wandering.

Maybe they were buried late at midnight too. Or maybe that idea migrated backwards from the period when burials of acknowledged suicides first came to be allowed in consecrated ground, but at night, and without religious ceremony.

In any case, long after burials ended at the Ballybough site, its eerie reputation lingered.

The excellent local history blog, eastwallforall.ie, quotes writer Weston St John Joyce in 1921 recalling a time when people “would have gone a considerable round rather than pass that unhallowed spot after nightfall”. And even in 1990, when Ballybough featured in a Dáil debate, TD John Stafford informed the house of a local tradition that “spirits are still in the park beside Luke Kelly Bridge”.

The suicides plot was not the only unusual cemetery in the area then or now. There remains an old Jewish graveyard nearby too, which goes back centuries, although one of its more recent additions, the caretaker’s cottage, bears the date 5618 (1858 in the Christian calendar). Ballybough was a place to which many newly-arrived migrants, not just Jews, gravitated. It was rather nearer the sea then than it is now, with Fairview Park having intervened between them in the years since. But it was also popular with outsiders of all kinds.

On a city map of 1822, part of the area was still referred to as “Mud Island”. This was a once infamous place said to have been inhabited by “smugglers, thieves, highway robbers, and desperadoes of all descriptions”. Even robbers needing rules, they elected a “king” from their number. The official city authorities were reluctant to set foot in it.

If Ballybough fed Stoker’s gothic imagination, he probably wasn’t the first writer so inspired. In the early 1800s, a pub there was home to a literary circle including James Clarence Mangan, whose poems included “Enigma – A Vampire”, and who sometimes signed his work as “Peter Puff Secundus, Mud Island, near the bog”.

Its supposed supernatural associations aside, the other thing Ballybough has been long synonymous with was poverty. This is thinly disguised in the anglicised name. But if Myles na gCopaleen had written a Dublin version of An Béal Bocht, he’d have had to set it here, in Baile Bocht, its near namesake.

Getting back to Stoker, we now know that, after early childhood in Clontarf, he spent teenage years living in Buckingham Street, just beyond Ballybough. This has now been enough for the north inner city – and my apologies in advance for the pun – to stake a claim in him.

It was formalised earlier this week with the unveiling of a plaque and mural on the house in question by the lord mayor of Dublin. The event was timed for the run-up to Halloween.

And Nial Ring’s accompanying speech was an interesting variation on the usual Stokeresque theme of neutralising the mischief of the undead.

It was the mischief of the living, or “anti-social behaviour” as it’s often known these days, that Ring was more concerned about. The problem is traditionally at its peak in the inner city around this time. Hence the Big Scream Festival (bigscream.ie), now under way and running until Halloween, which he hoped would harness any mischief-making into good, clean fun.

Celebrating Stoker’s adoption, he is a major sub-theme of the festival. The more sedate events will include an evening of talks next Tuesday about how the area shaped his work. For those unworried by the spirits in the park, meanwhile, there will also be “Gothic Torchlit Walking Tours”, on Monday and Tuesday. These are scheduled to start from Ballybough and to end in Buckingham Street, provided nothing unexpected happens in between.