For only the second time, an incumbent president is seeking a second term 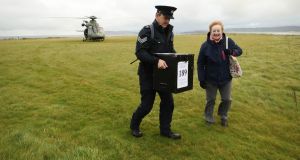 It is important that as many people as possible exercise their right to vote today, giving a strong mandate to the president who will serve the country for the next seven years. All of the candidates have had their share of criticism during the long and bruising campaign, but they each deserve credit for having the courage to put themselves forward for the State’s highest office.

It has been an unusual campaign to the extent that the two biggest parties, Fine Gael and Fianna Fáil, did not put forward candidates but instead chose to endorse the incumbent, Michael D Higgins, who was elected as a Labour Party nominee in 2011.

It was no surprise that he began the campaign with an overwhelming opinion poll lead over his lesser known rivals, but they have all had an opportunity in the course of the campaign to get their message across and make themselves better known to voters.

There was a big turnaround in the final days of the last presidential election seven years ago, which demonstrated that significant shifts in opinion are possible right up to the end of a campaign.

An unusual feature of this election is that it is only the second time since the enactment of the Constitution in 1937 that an incumbent president has sought a second term. The last time that happened was in 1966, when Eamon de Valera, the most successful politician in the history of the State, was the overwhelming favourite to win a second term.

In the event he did defeat his Fine Gael rival Tom O’Higgins but only by a tiny margin and his near defeat shocked the country. The unpredictability of presidential elections was in evidence in the subsequent election in 1973 when O’Higgins, who was regarded as having an excellent chance of winning, was soundly defeated by Erskine Childers. The lesson is that nothing can be taken for granted in presidential elections no matter how eminent, or inexperienced, the candidates are.

Presidential election campaigns are usually more bruising for the candidates than general elections and this one was no exception. All six of the contenders have had to cope with the spotlight being put on their private as well as public lives. The main reason for such a high level of scrutiny is that the president does not have any executive power so the personality of the office holder and their ability to represent the country and its values are critically important.

Polling stations will be open from 7am until 10 pm this evening so there is no excuse for failing to vote. The referendum on the proposed deletion of blasphemy from the Constitution is another reason to get to a ballot box. Changing the Constitution is not something that should be done lightly, so a high turnout is important.