Stephen Collins: An Irishman’s Diary on a fond farewell to Cape Clear 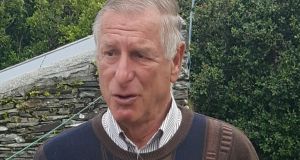 Chuck Kruger has written beautifully and broadcast frequently, mainly on RTÉ’s Sunday Miscellany, about life on the Cape and much else besides.

About 40 people sat in silence on Chuck Kruger’s lawn high up on Cape Clear. It was a beautiful July day as seagulls soared and swallows danced overhead.

The peaceful scene was enhanced by the sound of bees buzzing, insects humming, cattle lowing and the occasional human voices carrying from afar.

The sound of silence was occasionally interrupted by one of the guests saying a few words in tribute to Chuck or commenting on the beauty of the world as viewed from high up on Cape Clear.

The feeling of peace was tinged with a pervasive sense of sadness, as this was the last of the Quaker meetings organised by Chuck on the island that has been his home for almost 30 years.

As the hour-long service concluded, a small flock of choughs tumbled through the sky, the distinctive cries of the bird, which survives only in the remotest places, echoing around the headland.

The American-born writer and teacher is reluctantly returning to his homeland for health reasons at the age of 79. In their time on Cape Clear, Chuck and his wife Nell have established themselves as pillars of the community that comprises 140 odd souls.

He has written beautifully and broadcast frequently, mainly on RTÉ’s Sunday Miscellany, about life on the Cape and much else besides.

His love of storytelling prompted him to begin the Cape Clear Island Storytelling Festival, which, from small beginnings 23 years ago, has now become an international event.

Each year in the first week of September some of the most accomplished storytellers from around the world as well as some of the best Irish exponents of the ancient art come to the Cape. It has become so popular that it is almost impossible to find accommodation on the island where the stunning scenery, folklore and uniqueness of the flora and fauna truly make it a place apart.

A place to feel at home

Although their three children were born there the Krugers never felt truly at home in Switzerland. Having searched around Europe for a place they could really feel at home they bought a house and a 60-acre farm on Cape Clear in 1986 and moved there permanently in 1992.

In his 2015 book Moments: A Miscellany of Memories Chuck describes his first arrival on Cape Clear on the ferry from Baltimore in 1986:

“As we entered North Harbour I chanced to look up, and there were patchwork fields and drystone walls, a picturesque 12th-century ruin of a chapel, beside it a homely cemetery, at the head of the harbour a holy well and . . . I felt a rush of feeling come over me, my eyes wet. I had an ebullient sense that here, dead ahead, was a place where I could die.”

His frequent contributions to Sunday Miscellany have brought his wonderful powers of observation and wisdom to a wide audience. Photography is another aspect of his talent and he has taken over 22,000 pictures of the island over the years.

His final Quaker meeting on the Cape was an emotional and warm occasion. Chuck and Nell met their visitors on the north pier from the morning ferry and accompanied them back to the pier to wave a final goodbye as they left on the evening ferry.

Chuck will remain on the island for this year’s storytelling festival, which runs from September 1st to September 3rd. He will leave Cape Clear on September 14th.

Of his adopted island, Chuck once wrote: “Cape is a poem I read every day, every night. It’s a point of reference, a metaphor by which I confirm my very being. It’s a place I love more than any other.”

That love was reciprocated by the islanders and all his Irish friends. At the final Quaker service, islanders and visitors from various parts of the country paid tribute to Chuck and Nell.

“Beidh sibh beirt in mo croí go deo”, remarked one woman, summing up the feelings of all who have encountered them in their lives on Oileán Chléire.

1 Cork shooting tragedy: Postmortems to be carried out as community shocked by deaths in ‘well liked family’
2 Ciara Kelly: I was pregnant, unmarried, a junior doctor and I got old-school comments
3 Third person arrested in education board corruption investigation
4 ‘Shellshocked’: Outrage in Australia after women on flight strip-searched in Qatar
5 Son (23) who died in suspected Cork murder-suicide was due to graduate
Real news has value SUBSCRIBE