Should the rich get to choose how they contribute to society? 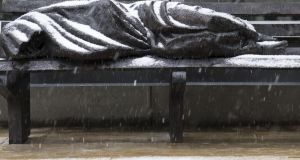 Timothy Schmalz’s sculpture of homelessness: It is hard not to feel unease at the notion the wealthy get to choose how they contribute to society. Photograph: Carlos Osorio/Toronto Star

It is bad manners to look a gift horse in the mouth but the Dublin Simon Community’s latest initiative to alleviate homelessness in the capital is worth a quick dental exam.

Simon, through its Social Impact Fund, is asking wealthy supporters to buy houses and then lease them to the charity for free for 15 years. Simon will in turn rent them to local authorities to provide social housing. The charity would hang on to the rent and maintain the properties. They have a target of 50 units at a cost of €12 million.

The problem – if that is not too strong a word – is not the idea itself but what the whole thing says about our direction of travel as a country.

It is interesting – and probably not entirely coincidental – that the two business men associated with the project, Michael Carey and Neil O’Leary, have a strong track record of charitable work in Haiti , which is in effect a failed state.

The two were instrumental in an initiative called Soul of Haiti which connected Irish business people with fledgling enterprises and community initiatives in the poorest country in the western hemisphere.

It says something not very flattering about the Government’s failure to tackle homelessness that Carey and O’Leary take the view that similar direct action is now warranted in Ireland, which is one of the richest countries in the world.

Even more significant is that Carey is the non-executive chairman of the Housing Agency, the State body charged with “delivering sustainable and affordable housing for all” and “supporting homelessness through sourcing of properties suitable for the Housing First Programme”.

His position will have afforded him a ring-side view of the Government’s incoherent and ineffective efforts to tackle the housing crisis. If the Government was capable of embarrassment over its housing policy this would be an appropriate time to show some. They have chosen wisely to keep their heads down. It is a pity in a way as the Simon initiative touches on a number of thorny issues.

There is nothing new in the notion that government is inherently incompetent and the “market” will always produce a more efficient solution to any problem from homelessness to healthcare.

It is one of the tropes of neo-liberalism – and no doubt has it supporters in certain sections of Fine Gael – although it cuts across the social democratic values to which most Irish parties subscribe to a greater or lesser extent.

Ireland has also always had a very large charitable sector dominated by religious organisations and orders. They are so deeply entwined in the health and education systems that extricating them has proved enormously difficult. But the origins of this relationship in the corporatist thinking that informed the founders of the State means that they don’t really constitute “free market” solutions. The religious traded their labour and their assets in return for control of the ethos and values of the health and education systems.

There are also countless small charities that complement the efforts of the State to provide for the less-well-off. Some of them have now become very substantial undertakings and have supplanted the role of the State as the primary provider of certain services.

They rely heavily on public support and are becoming extremely adept at raising money from the very wealthy, Simon’s latest initiative being a good example.

So, what is the problem? It is hard not to feel a certain unease at the notion that the wealthy get to choose how they contribute to society. The dangers are clear.

It can add a layer of legitimacy to a culture of tax avoidance with individuals being applauded for philanthropic gestures despite paying little or no tax. People see you at charity galas; they don’t see your tax return.

Another problem is that people give to the causes that appeal to them and not necessarily to the most deserving. The effect can be to heighten inequality. US universities have endowments totalling $616 billion (€547 billion). Harvard alone has a fund of $39.2 billion. Feeding America, the largest hunger-relief charity in the US with a network of more than 200 food banks and food rescue organisations, has assets of $150 million.

We are a obviously a long way from such a state of affairs here and will probably never get there. But we are also a long way from the alternative in which all that is asked of any individual is that pay their taxes.

It would be unfair to claim Simon’s Social Impact Fund is in a significant way anything other than what it appears: charity. But at the same time it is a straw in the wind and symptomatic of underlying problems in how the State raises money. And more critically how it spends it.

As long as the State fails to discharge its responsibilities in this regard there will be deficits in the provision of essential services such as housing and healthcare that will have to be filled. And the danger is that the deficits that the wealthy want to be associated with, rather than the most important, will be the ones that get filled first.

4 Netflix: 10 of the best new shows and films to watch in December