Are men just better at science than women? 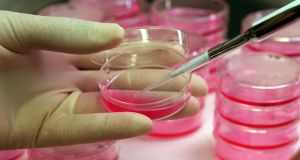 “There is no scientific basis for those who might try to claim that positive discrimination towards female scientists is futile on the basis that science itself says men are better.” Photograph: Lyn Alweis/Getty Images

Talk about bad timing. The day after the Government announces that it is creating dozens of “woman-only”professorships in science and engineering a report appears in a respected scientific journal apparently telling us that men are simply better at science

Even discussing the possibility that the hardwiring of the male brain and female brain might be different is dangerous territory. Those who advocate such views are quickly accused of “neurosexism” and had better watch out for themselves on Twitter.

The consensus may be that it’s a topic best left to the inhabitants of internet chatrooms but it remains a serious and legitimate area of scientific research.

The results of the most recent study was published this weekin the Proceedings of the National Academy of Sciences – one the most prestigious scientific journals. It was carried out by researchers at the department of psychiatry at the University of Cambridge.

They were looking at something called E-S or empathising–systemising theory, which holds that individuals can be classified based on empathy and systemising. Empathy is described as the ability to recognises someone else’s mental state and respond to it. Systemising is the drive to analyse or build a rule-based system.

So far so good for those who might argue that the differences between men and women are hardwired and the Government is wasting its money positively discriminating in the appointment of woman to science and engineering professorships.

But that is about as good as it gets for them. The researchers were clearly alive to the possibility of their research being used to propagate such arguments (and being beaten up on Twitter for being neurosexists). They made the point that the average sex differences they observed “likely reflect an interaction of biological and cultural factors”.

For the sake of clarity they say the existence of known biological factors such as exposure to testosterone (the make hormone) in the womb “in no way denies the importance of social experience”.

And just in case the more trigger-happy inhabitants of the internet were not paying attention they state categorically that E-S theory doesn’t allow you to make any assumptions about someone’s psychological profile based on their sex. What the research allows you to do is draw general conclusions about men and women but there is no way of knowing what type of of mind (in terms of E-S theory) an individual has.

“A careful reading of the E-S theory therefore leads to the conclusion, for example, that it would be wrong to prejudge an applicant for a job in Stem [science, technology, engineering and maths] based on their sex, both morally and scientifically.”

Its worth noting that the researchers were not even looking at this issue. They were approaching the topic from the perspective of what it might reveal about autism – which some argue is more common in people with systemising brains. This was borne out – again on average – by the study.

So there it is. Despite a promising headline there is no scientific basis for those who might try to claim that positive discrimination towards female scientists is futile on the basis that science itself says men are better.

What the study really says in the context of the Gender Equality Action Plan for Higher Education Institutions is that some people are better as science than others. Its partly down to biological differences but there is no reason to believe this trumps environmental factors. And we certainly can’t predict it based on someone’s sex.

It’s all very obvious really and ties in with what most people know intuitively about the pernicious effect of girls not being encouraged to study Stem subjects from an early age.

It is equally obvious that a woman who has put herself in the running for a professorship in science and engineering has clearly overcome or is immune to what ever unknown factors seem to be behind this divergence. Maybe she never experienced them?

If anything it’s probably easier to twist the results of the Cambridge study to support the Government plan to spend €6 million creating 30 women-only professorships over the next two years .

It’s hard to argue that more female professors will not be conducive to an environment in which women and girls are more systemising than empathetic. But that would presuppose a level of social engineering at which even China’s Communist Party might baulk.

This week’s initiative is short term and as much about making a political statement as anything else. In fact it has distracted somewhat from the more longer-term ideas in the action plan.

But at least it has science on its side.