Should we care about Trinity College ‘hazing’ antics? 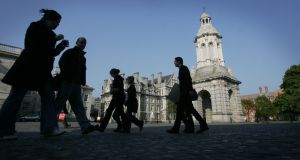 A referendum is to be held in TCD on whether the student union should stop funding the University Times to the tune of €14,000 a year. Photograph: Alan Betson

On the off chance that you are not endlessly fascinated by what Trinity students get up to in their bedrooms let me bring you up to speed. We are reliably informed by the University Times (no relation) that a secretive grouping has been engaged in some arcane and rather unwholesome activities on campus.

It seems that initiates to an elite sporting society were being jeered and shouted at in the rooms of one of the members. It is also reported that they could be heard being told to eat butter, and that gagging and retching sounds could be heard from within “the apartment”.

The whole thing – and the last part in particular – sounds like a pretty standard party in Rooms back in the day but times have clearly changed, for the better no doubt.

The University Times’s interest in these macabre goings-on centres on the issue of hazing or more specifically the ritual humiliation and degradation of people as part of their initiation into a club or group. It’s an issue that has garnered a lot of attention, particularly in the United States, where there have been a number deaths as a result in initiations into US college fraternities in recent years. Initiations have been banned or severely curtailed in a number of universities as a result. Hazing in Trinity was a pretty obvious and legitimate story for the University Times to go after and they appear to have done so with gusto. So far, so student journalism.

Knights of the Campanile

There are a number of things about the story that are unfortunate. One being the name of the society in question: the Knights of the Campanile (think Dan Brown’s Illuminati meets David Cameron’s Bullingdon Club). Membership is by invitation only and is made up of leading college sportsmen.

Another is the name of the president of the knights: Ben Arrowsmith. We know nothing of Arrowsmith and are sure he is upstanding member of the student body. But we can’t help thinking the whole thing would not have travelled quite as far as it has were he called Paudgie O’Culligan and we were talking about the scuba-diving club.

There is also the issue of how the The University Times went about reporting the story. By their own admission they surreptitiously tried to record the goings-on at the knights’ initiation ceremony (or private party as some might choose to describe it ) and were caught. They are now in spot of bother with college authorities and are claiming, without a hint of irony, that their action was justified in the public interest.

It is a story that just keeps on giving. The upshot of this inspired escalation of the matter into the realm of constitutional jurisprudence was a rather intemperate public disagreement between Trinity law professors as to whether the public-interest argument holds water. To the surprise of one and all the legal faculty could not agree on this particular legal conundrum. Hopefully they are all working pro bono.

There are now two investigations being conducted by the junior dean. One into the dietary and other nocturnal habits of the Knights of the Campanile and other into whether or not the University Times is the rightful heir of Woodward and Bernstein.

Rumbling away in the background is a referendum – on foot of a petition by 500 students – on whether or not the student union should stop funding the University Times to the tune of €14,000 a year. This stipend includes rooms for its editor and presumably what he or she does there with friends of an evening is nobody’s business but their own.

It’s easy – and, frankly, important – to laugh when student navel-gazing reaches such absurd heights of self-absorption, particularly at an institution as august as Trinity College (founded in 1592 by royal charter from Queen Elizabeth to reinforce the legitimacy of British rule in Ireland and latterly, it seems, to boost consumption of dairy products by elite athletes ).

But is also in its own way profoundly heartening. The University Times may be a tad over-zealous in drawing parallels between the the Knights of the Campanile and the very serious issues of hazing at US universities. They would not be the first publication to ever push a story too far. Time and the college authorities will determine whether the story and their methods are justified, although they should move quickly as the whole issue is in danger of disappearing up its own backside any moment now.

But it can only be considered a positive thing that awareness of bullying (and by inference other type of discrimination) among the student body is such that a college paper would even think of questioning the appropriateness of what went on.

Equally heartening is that the really important issue of the freedom of the press and the role of the public interest are being aired on campus and seriously discussed, even if there is more than a hint of farce about the whole thing. Hopefully the outcome of this particular storm in a teacup – apart from better student nutrition – will be that our leaders in waiting will have an understanding of the fragility, subtlety and importance of freedom of speech. Maybe this in turn will inform their actions the next time someone seeks to deny a speaking platform in Trinity to an individual whose ideas don’t conform with their own.

1 Acclaimed Connemara writer Tim Robinson dies at 85 from coronavirus
2 Coronavirus: Situation in Ireland ‘misrepresented’ because of limited testing
3 Coronavirus Q&A: How to shop safely during Covid-19
4 Coronavirus: Republic reports 22 further deaths, 424 new cases
5 What is Houseparty, the app everyone’s talking about – and not in a good way?
Real news has value SUBSCRIBE