John McManus: Someone finally shouts stop but nobody cares 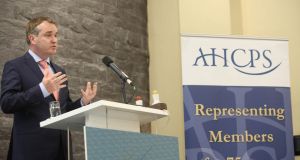 Robert Watt is widely reported to have been one of the “senior officials” who have counselled against proceeding with the rural broadband plan because it does not represent good value for the taxpayer.However, the Government is determined to press ahead with the project.

Poor old Robert Watt must feel he just can’t win. The notoriously prickly secretary general of the Department of Public Expenditure and Reform drew the fire of no less than three Oireachtas committees over the Government’s failure to control the costs of the National Children’s Hospital. After weeks of argument he agreed in early March to appear before a star chamber composed of members of the Public Accounts Committee and the Finance Committee.

Watt delivered an 18-page opening statement in which he talked about many things, but not the National Children’s Hospital. He described how his department, despite its grandiose title, had responsibility for how taxpayers’ money is spent but very little power. They keep an eye on how the money is being spent but its up to individual departments and agencies to deliver projects within budget.

The true extent of his department’s impotence was revealed in an aside he made to the committee about the national broadband plan – a project which is threatening to make the children’s hospital look like a bargain.

Originally tagged to cost €500 million it is now expected to require an investment of €3 billion from taxpayers but will not be owned by the State.

Mr Watt was asked to give his view on the rising cost of that plan. He demurred. “I have views, but any comment I would make would be career ending.”

It seems, however, that he made his views clear in private and they have now become public. Watt is widely reported to have been one of the “senior officials” who have counselled against proceeding with the plan because it does not represent good value for the taxpayer.However, the Government is determined to press ahead with the project.

Irony does not even put a tooth in it. Watt would appear to a have done exactly what politicians castigated him for not doing – rightly or wrongly – with respect to the costs of the children’s hospital. He has shouted stop. But he has in turn been completely ignored by politicians .

It must be particularly galling for Watt, who joined the Department of Finance from the public sector in 2008. He had a ringside seat as the banking sector imploded and nearly took the country with it.

He participated in the hand-wringing and recrimination that followed which culminated – from the Civil Service’s point of view at least – in the Nyberg Report.

The report, by the former Finnish civil servant, took very few prisoners. The Department of Finance was beaten up for not forcibly injecting itself in the debate about the stability of the financial system.

The following is from the conclusion so the report: “The commission could find no evidence that the Department of Finance formally tried to influence the financial regulator in its work. The department also did not make any efforts to strengthen its own financial market expertise, despite crisis management exercises in the EU having shown a need for it among finance ministries.”

It is well documented that the department consistently, though not forcefully enough, supported a less expansive fiscal policy, particularly regarding property market incentives. It also appears that worries about the developing financial situation were expressed internally from time to time by some department staff.

However, nothing came of this as “the Central Bank and financial regulator were seen as responsible for financial stability”.

Put simply, the department did not even pick up the ball, never mind drop it.

There are interesting parallels between the department’s hands-off approach back then and the formal relationship between Watt’s Department of Public Expenditure and Reform and the agencies that spend the taxpayers’ money.

But the the crucial difference seems to be that 10 years later a senior public servant who lived through the crisis – and presumably bears the scars – did force his way into the the debate even though, by his own admission, his career could suffer.

But what is really perturbing is that nobody seems to care. The civil servant who, whether he likes it not, is seen by our elected representatives as one of the guardians of the public purse has said something is a really bad idea, but they are going to go ahead and do it anyway.

It does make you wonder what would have happened if, by some happy chance, the Department of Finance had tried much more “forcefully” to get the government to slow the economy and rein in the property market in 2007?

What if, for example, the secretary general of the Department of Finance had put his career on the line and spoken up? Would it have made a blind bit of difference?