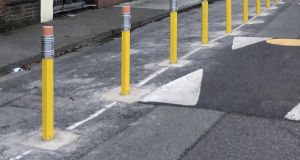 “The bollards are part of a trial to discourage motorised drop-offs and make the place safer for children.”

The season of mists and mellow fruitfulness may have been deferred due to a late outbreak of summer this year, but the season of rubbers and yellow pencils is well under way.

And cycling through Dublin’s Liberties the other night, I noticed a charming new extension of the theme – a row of pencil-shaped bollards, complete with erasers, outside Francis Street School.

In this case, the only thing being erased was car-parking. The bollards are part of a trial to discourage motorised drop-offs and make the place safer for children.

It’s a small piece of the Liberties, liberated from traffic.

But the pencils are a witty way of doing it.

They’re also an example of how, with effort and imagination, everything can be designed.

I didn’t realise until posting a picture on Twitter, however, that there now exists (in name, anyway) a “World Bollards Association” – a sort of fan club for those who appreciate excellence in the genre. It mainly just publishes pictures of the best examples from around the globe, but it also includes reminders of what bollards are for, via occasional CCTV video of cars driving into them.

Dublin has already featured, thanks to a tiny lighthouse-shaped model in Clontarf. But there is huge scope for other local adaptations. You could imagine pint-bottle shaped bollards outside Guinness’s, say, or Wellington Monument miniatures in Phoenix Park.

Given the basic shape, though, there are limitations.  You probably wouldn’t want to see them outside Ann Summers.

The coming months will also be a season of masks and alcohol-gel dispensers, something from which even Keats might have struggled to make poetry. On the plus side, we should be used to it by now.

But autumn 2020 may be unusual in that the imminent mass leaf-shed will be accompanied this year by the fall of a new kind of  foliage – white on one side, light blue on the other, with elastic loops at either end.

It’s happening already, I know. On holiday in Kerry last month, I was both astonished and depressed at the ubiquity of discarded masks, even in some of Ireland’s most officially beautiful places.

At the famous Lady’s View near Killarney, for example, I stopped to marvel at the panorama of mountain and lake, touched off by a family of wild deer nearby.

Then the breath-taking quality of the scenery had to compete with the sigh that involuntarily escapes you when you see that, even here, somebody had dropped a mask.

I can’t believe people do this deliberately. There must be another explanation. Maybe it’s that, when taken off between indoor visits, the masks are stuffed into the nearest and most accessible pocket, for easy retrieval. Then they fall out unnoticed. Surely that’s it?

Another revelation of autumn 2020 is that we don’t have Halloween fireworks anymore in Dublin. We don’t even have an entire month of them in the run-up October 31st, as used to be the case. It’s a whole season now, starting in August.

There was a telling moment one night recently when I was sitting on my back patio, reading from George Orwell’s wartime diaries, as the Battle of London raged around him.  Many entries were lengthy and action-packed. Then there was the one for November 16th, 1940, a single line: “I never thought I should live to grow blasé about the sound of gunfire, but so I have.”

This made me look up for a moment and realise that the skies of Dublin 8 were alive, as is now usual, with the sound of ballistic missiles. I had stopped noticing lately. It has been going on so long already I can no longer remember when it started.

Getting back to bollards, or at least to a similar-sounding word we were discussing recently (An Irishman’s Diary September 8th), reader Gerard Cavanagh has shared a story he heard from Brendan Kennelly, who in turn inherited it from another Brendan – Behan – on the difference between prose and poetry. It centres on a man named Hand, supposedly a clerk in the venerable Dublin company of Ferrier Pollock. The company was real, at least. It was a haberdashery wholesaler based where the Powerscourt Centre is now. I can’t vouch for the clerk, who was supposedly in the habit of walking barefoot every day on the beach at Sandymount.

Anyway, Behan told it as follows, in semi-blank verse: “There was a young man/Called Christopher Hand/Who worked in Ferrier Pollock’s./He walked down the strand/With his shoes in his hand/And the water came up to his ankles.” This was an example of “prose”, Behan would then explain. “If the tide had been fully in, it would have been poetry.”