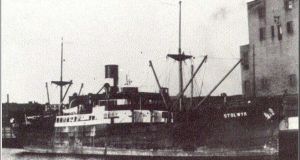 SS Stolwijk: Dutch steamship smashed onto rocks off Donegal, precipitating one of the most heroic rescues in Irish maritime history

Recalling the storm that smashed a Dutch steamship onto rocks off Donegal, precipitating one of the most heroic rescues in Irish maritime history, Andrew Early places it in the perspective of his own long life. “I was […] nine years of age at the time, I’m 87 now,” he told the makers of a documentary to be broadcast this weekend.

“I’ve never seen a morning like it in all my life and I don’t want to see it again either.”

It was December 1940. The SS Stolwijk had been travelling as part of a merchant convoy escorted by British warships in seas where the biggest threat was usually German U-boats.  This time, the problem was a hurricane.

First the ship’s rudder broke. Then, when the captain dropped anchor, the chain snapped. Even set to reverse, the vessel was swept towards a reef near Tory Island. The radio operator was washed overboard by a massive wave. So was one of the lifeboats, although some crew members scrambled on board in time to be sunk with it. Fourteen men were lost, and only three bodies ever found.

One of the British destroyers tried to rescue the remaining crew and was itself almost destroyed. A wave swept away most of its deck fittings and the captain suffered a fractured skull. The effort had to be abandoned.

The Stolwijk was on the rocks, meanwhile, in imminent danger of breaking up, with 18 crew members still on board.

It was into this hell that the Arranmore lifeboat, crewed by eight fishermen, including skipper John Boyle, put out to sea at 6.30am on December 7th. They had waited overnight after receiving the distress call because it was simply too dangerous to sail.

But the winds were still measured at 94 miles an hour, there were showers of sleet and snow, and the seas were so high that people watching from cliffs lost sight of the boat before it had gone a mile out. Some on shore feared it was a suicide mission.

It took six hours just to reach the stricken ship and that was only the start.

The official report said that the lifeboat was at one point lifted to the height of the steamer’s masts as it tried to get near enough to throw a lifeline.

By then, the Stolwijk’s crew were huddled near the stern. “The seas were breaking over them and it was a miracle that they were not all washed away”. But a line was secured eventually, with a breeches buoy suspended from a pulley, to lift the men off one by one.

Twice the line snapped on the steamer’s deck rails, forcing the lifeboat to heave anchor, reposition, and throw again. But somehow all the men got off alive, each spending up to five minutes in the sea en route.

That took four hours. Now the rescuers had to get back to Arranmore in still-mountainous waves. When they did, it was too rough to land. They had to go to Burtonport instead.

It was now night-time, 22 hours after the crew had assembled. They were so exhausted that, once the Stolwijk survivors were safe, they had to be helped off themselves. They also had to take turns to stay on the boat overnight because it could not be safely moored.

John Boyle was subsequently awarded the RNLI’s highest honour, a gold medal. The lifeboat’s mechanic Teague Ward got a silver. The other crew, including Boyle’s brother John, a second set of brothers Neil and Philip Byrne, along with Bryan Gallagher, Joseph Rodgers, and Patrick O’Donnell, all received bronzes. A grateful Netherlands decorated them too.

The men are little remembered today outside Donegal. Even at home, apparently, with the classic stoicism of the breed, they never talked about the rescue much. But with the 80th anniversary approaching, it will be celebrated by the documentary on Lyric FM this coming Sunday night.

It is not just a documentary, in fact. It was conceived as a “radio ballad”, a format created in the late 1950s by Ewan McColl and Peggy Seeger. Along with a BBC radio producer, Charles Parker, they collaborated on a classic series of programmes covering such subjects as mining, the construction of Britain’s M1, and the struggle against polio.

Written and presented by musician Brían MacGloinn, who produced it along with Eoin O’Kelly, the Lyric broadcast will doff its cap to the McColl-Seeger form, revolutionary in its time for using the voices of real protagonists.

There are not many voices from 1940 Donegal still around, alas. But in the subject of ordinary people doing extraordinary things, MacGloinn’s radio ballad has a suitably epic subject.