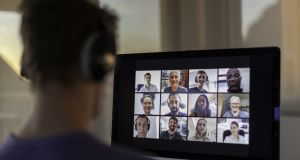 “So it was that, rather than to Seoul, I flew into my Dublin 8 kitchen on Monday at 7am, to log on to Zoom.” Photograph: Getty Images

I should have been seeing autumn in Korea this year.  In fact, I should have seen spring there, but thanks to Covid-19, an event called the World Journalists Conference, to which I was invited, kept getting postponed. Finally, they gave up on having the real thing this year. And so it was that, rather than to Seoul, I flew into my Dublin 8 kitchen on Monday at 7am, to log on to Zoom.

I had set the alarm for 6.40, allowing for coffee first. But a phone call from the ultra-efficient organisers quickly followed. And when I connected with the conference, I was doubly alarmed to see that everybody was there already – my screen full of screenshots of people from all over the world, most of them on afternoon or evening time, and not (like me) blinking bleary-eyed at sunrise.

Somehow, the event reminded me of a Polish wedding I attended a few years ago. We had been warned this would be a two-day affair. But the Irish guests were still sleeping off Day One when we were scrambled from our beds to find all the Poles already re-seated in the dining room, fully primed to go again. At least at the Polish wedding, though, I didn’t have to make a speech.

My speech was short, in fairness, and there were plenty of others on first. We were listed in alphabetical order of countries, United Nations-style. I would like to claim that, as in the famous joke about Ireland’s UN delegation, I was located “between Iraq and a hard place”. But in this case, there was nobody from either Iraq or Israel. My virtual neighbours were Iran and Kuwait instead.

Our theme was “fake news”, so of course there was a lot of talk about social media, conspiracy theorists, independent fact-checking and so on.  Being down the order and needing a different angle, I started by making the point that, contrary to what you might think, the problem hadn’t been invented by Donald Trump in 2016.

This was an obvious point, but it was part inspired by my surprise, when typing “fake news” into The Irish Times archive, that the earliest hit was from 1909.

It was the report of a complaint by an Irish politician in Westminster, who wanted action taken against false stories in the British press about the levels of violent crime in Ireland.

This was a recurring theme then, clearly, because James Joyce had written a now-famous essay on something similar not long before. With home rule looming, Ireland was portrayed in London and beyond as a country incapable of self-government. Anyway, the British chief secretary said there was nothing he could do.  When the politician asked if publishing false news were not a crime, Augustine Birrell quipped to laughter: “If so, I fear the prisons would be full of people.”

After the WJC speeches, the debate was opened to the world’s floor. Like everything else, this was tightly scheduled, and I had no ambition to get involved. But as the conference wrapped up, I was alarmed for a third time in the morning when the moderator announced that, “finally”, he had a question for “Mr Frank McNally from Ireland.”

For the next few minutes I heard myself expanding on a point made earlier about the dangers of journalists “wearing the green jersey”, as we say here, and getting too caught up in the official consensus or what seems to be the national interest at any given time, especially a time of crisis. With Covid-19, I cautioned, what was accepted wisdom today might yet turn out to have been fake news. But in danger of waffling, I needed a concrete example. Suddenly I remembered face masks. We were being told to wear them now in Ireland, I said. And I agreed with this, partly because last April, when we were being told otherwise, I had seen a deeply impressive interview on YouTube with one of Korea’s leading experts on infectious disease, which convinced me that masks would help.

He had been puzzled then at the reluctance of western governments to recommend them and suggested it could only be because of fear of people panic-buying them and leaving hospitals short. But anyway, I continued, Ireland was strongly pro-mask now, which showed how quickly official wisdom could change.

This made for a gratifyingly neat conclusion, just as the conference clock ran out. Then I logged off Zoom and checked back in with real-world Ireland, where one of the morning’s breaking stories was also face masks, and outrage over a radio discussion that had planned to question the new, improved consensus.