Mean, Green Grass of Home – Frank McNally on the greatest of all Irish curses

‘May the grass grow before your door’ 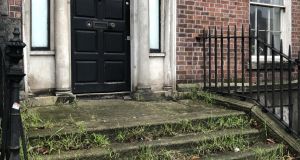 15 Usher’s Island – the house has been empty for several years now, its future uncertain

Of the many curses, poetic and otherwise, that past generations of Irish people had at their command, few were as damning as this one: “May the grass grow before your door.”

Singling it out from a long list of maledictions mentioned in his Traits and Stories of the Irish Peasantry (1853), William Carleton commented: “Its malignity is terrible”. He added: “Nothing […] can present the mind with a stronger or more picturesque emblem of desolation and ruin.”

The expression had even crossed the Atlantic by then. It turned up in Florida in 1836, in a travel piece by an unnamed correspondent for the Knickerbocker magazine, a New York weekly. Describing an abandoned settlement on Amelia Island, he wrote: “ . . . it shows that the Irishman’s curse – ‘May the grass grow before your door’ – is no trifle”.

You can probably still hear the phrase in certain corners of the US today. It has featured too, for example, in the writings of a living New Yorker, Leslie Maier. Her mystery novel The St Patrick’s Day Murder has a character quoting it as “something my mother used to say when somebody crossed her”.

But we are often guilty in this country of thinking a thing uniquely Irish when it isn’t. And while searching for the curse among the endless boreens of Google, I was also startled by the suggestion – from a 1903 restaurant guide, published in London – that it might be Italian.

“The Gourmet’s Guide to Europe” recounted a tour of the great culinary capitals – Ireland did not feature – during which the authors noted: “Genoa is a town of noise and bustle. The worst curse one Genoese can pronounce to the other is ‘May the grass grow before your door’.”

That book was written jointly by a “Lieut.-Col. Nathaniel Newnham-Davis” and the less fortunately named “Algernon Bastard”, both apparently English.

The New York Times called it “a veritable master-work of its own genre” and marvelled at the life Newnham-Davis – a celebrity food-writer, for the Pall Mall Gazette – led: “He is not of a domestic turn. The people of the gay world he affects breakfast at a café, lunch at a club, dine in the palm room, or the ivory room, or the gold room of a ‘swell’ hotel.”

Of poor Bastard, by contrast, little is now known. Maybe, with his nominal affliction, he could have shed light on how Carleton’s curse ended up in Genoa.

Failing that, we must guess it trickled down the mountains from nearby Bobbio, where Irish monks built an abbey in the seventh century.

Or perhaps there is a hint in the cast-list of Newnham-Davis’s female dining companions. A life-long bachelor, he gave them pseudonyms in his write-ups. One was “the Colleen”, a woman of presumed Irish origin, who “prattled incessantly of horses”.

Anyway, staying with the subject of food-writing but moving from Genoa in 1903 to Dublin a year later, the latter is of course the setting for one of the most famous dinners in literature, served at a party on the night of Little Christmas 1904 and described in James Joyce’s The Dead.

The story and the house where it happens – 15 Usher’s Island – were also the subject of John Huston’s 1987 film. And during the years when Brendan Kilty was trying to keep No 15 alive as a cultural centre, I had the privilege of attending annual recreations of the dinner on the night of January 6th.

There was no such event in 2021, alas. Covid aside, the house has been empty for several years now, its future uncertain. But I had the different pleasure on this year’s Feast of the Epiphany of watching, from home, a live Zoom reading of The Dead, organised by the James Joyce Centre.

It wasn’t a public performance, really, more a quiet marking of the date. Yet it featured some high-powered readers, including Barry McGovern, who performed the immortal closing passage, and even members of the 1987 film cast.

Rachael Dowling played Lily, the housemaid, in the movie. Here she had been promoted to the lead role of Greta and was electrifying (I may have shed tears watching her, but don’t tell anyone) as she remembered how poor Michael Furey died.

I happen to live near Usher’s Island, so both that night and next morning, I took a walk past it to remind myself what the house looked like. By a happy chance, the newspapers had been predicting snow. And there was indeed a light fall during the early hours. Unfortunately, none of it settled outside Number 15. Instead, and sad to say, only grass was general, all over the doorsteps.