A journal of Dublin in the plague year 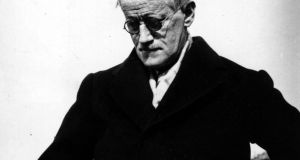 James Joyce was a medical student in Paris for a short period and made a doctor the protagonist of his first (and now lost) play. Photograph: Hulton Archive/Getty Images

If the whole literary thing hadn’t worked out for him, James Joyce might have fallen back on one of his earlier plans and gone into medicine. He was a medical student in Paris for a short period and made a doctor the protagonist of his first (and now lost) play, A Brilliant Career, before deciding that the play too was a bad idea.

Written in the summer of 1900, while Joyce was staying in Mullingar, it followed his hero’s progress during an outbreak of plague. He sent a copy to the critic William Archer, who made encouraging noises. But soon afterwards, Joyce destroyed the manuscript. Little else is known about it, except that it carried the pompous dedication “To my own soul”, which suggests he destroyed it wisely.

In one respect the play was uncannily timed, because the very day Joyce sent it to Archer, August 30th, 1900, health authorities in Glasgow confirmed an outbreak of plague. This revised diagnosis followed deaths earlier in August that had until then been blamed on typhoid. And among the immediate results of the news was a panic in Joyce’s Dublin.

The Glasgow crisis was part of a global pandemic that resurfaced sporadically in the decades on either side of 1900. San Francisco had been affected since at least the spring of that year. But in the early days of September, there was every reason to fear Dublin might be next.

It wasn’t just that it was a port city, the first of call from many Glasgow ships. It also had some of the worst sanitary conditions in Europe, especially in the teeming city-centre tenements. Above all, it had a large rat population: the presumed agent of spread.

One of the first responses of Irish health authorities was to issue a fatwa against these “pestiferous rodents”, which were said to congregate especially in neighbourhoods along the city quays, to Kingsbridge (now Heuston) station.

Tenders were invited for their destruction. In the meantime, war was also declared against “filth” in general.  Where inspectors considered the condition of a house to be a health risk, they were empowered within 24 hours to “thoroughly cleanse, purify, and limewash” everything from ceiling to floor.

Back at the port, arrivals from Glasgow were fumigated. A hospital ship was stationed nearby to deal with suspected infections. Farther afield, the convalescent home of Cork Street Fever Hospital was commandeered to deal with any generalised outbreak.

It wasn’t just Dublin that feared the worst.  All the main Irish ports took precautions. So did some lesser ones. In a Kerry version of the Wuhan coronavirus hospital, Fenit was earmarked for an emergency facility to be built from scratch. It was not a high-tech hospital. At a meeting of the local council, one proponent calmed fears about the cost by describing as a glorified “shed”.

As events transpired, even the shed never rose beyond its foundations before the emergency subsided. The short-lived plague in Glasgow cost 16 lives that autumn.  More than 100 died in San Francisco, where it lingered for several years.  But by November 1900, the panic in Ireland had passed, making way for the inevitable suggestions that authorities had overreacted.

Rats, by the way, may have been unfairly blamed for the Scottish outbreak. Inspectors at the time found no signs of the disease among rodents. Suspecting human-to-human contact as the main risk, health officials and the Catholic Church banned traditional-style wakes for victims.  A 2019 study of the historical data suggests this was wise, confirming that community spread was the key factor, starting on “Day Zero”, August 3rd, 1900, when “Mrs B, a fish hawker” fell ill.

In any case, Dublin can only have benefited from the enforced clean-up. Speaking of wakes, and getting back to Joyce, it has been noted that the books he did publish, as well as increasing in complexity throughout his career, also grew ever more crowded, up to and including the chaotic Finnegans Wake.

By contrast, the city of his debut collection, Dubliners, seems half-deserted, which one critic has suggested was because the stories evoke a “plague year”.  Officially, insofar as its ex-medical-student author diagnosed a common illness in his characters, it was moral rather than physical.  But Dubliners was also, in passing, a record of the dirtiness of the city then.  It was not his fault, Joyce protested, that all the stories were haunted by “the odour of ashpits and old weeds and offal”.