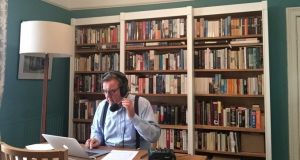 Bryan Dobson: his brimming shelves powerfully combined evidence of his extreme erudition with the principles of interior design – a feat all the more impressive because it was the backdrop for a radio programme. Photograph: @BryanMIreland 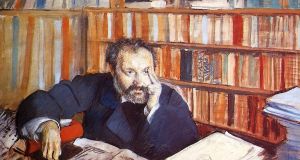 One of the great revelations of the lockdown has been the continued importance, in an age of electronic media, of the three-dimensional bookshelf.  Certainly, if you’re a journalist or any kind of expert doing remote interviews on television during the crisis, it is the all-but-compulsory item of background furniture.

A few brave people have opted for kitchens instead.  One or two have chosen nondescript corners of their homes that can be explained only by wifi hotspots.

But even at the risk of highlighting some large disparities in the resources they had to call on, the vast majority of TV interviewees have opted to frame themselves as part of a shelf-portrait. Some bookshelves have looked a bit desultory.

Others have been well stocked but too neat to suggest regular usage. Few have rivalled that of RTÉ’s Bryan Dobson, whose brimming shelves powerfully combined evidence of his extreme erudition with the principles of interior design – a feat all the more impressive because it was the backdrop for a radio programme.

As for the less well endowed, and if this isn’t happening already, there must now be a gap in the market for someone to provide a related consultancy service. Customers might range from those who rarely open a book to those who read widely, but via Kindle or other electronic devices.

The consultant could arrange their existing material, however inadequate, to maximum effect, or where necessary supply the shelves and their contents, per metre.  It needn’t contravene HSE guidelines. Users would never be required to touch the books, just do Skype interviews in front of them, from a safe distance

Eighty years ago, during another time of emergency, Myles na gCopaleen of this newspaper unveiled his famous Book-Handling service, along similar lines. That one was aimed at “illiterate, but wealthy upstarts”, a niche but growing market in the early years of Irish independence, who owned lots of books but also needed to give the appearance that some had been read.

There were several levels of handling offered, rising in price from the “popular” (“each volume to be well and truly handled, four leaves in each to be dog-eared, and a tram ticket, cloak-room docket or other comparable article inserted in each as a forgotten book-mark”) to the “Traitement Superbe”.

This last one was to be carried out only by master handlers, who would underline suitable passages of books (“in good-quality red ink”), while also inserting apt comments in the margins, including “Nonsense, nonsense!” and “I remember poor Joyce saying the very same thing.”

Well, the bookshelf consultancy would deal in broader strokes than that. There is little danger for the foreseeable future of any of us having to host parties where visitors would be taking books off shelves for a closer look. But the stressing of spines could still be important for Skype interviews, along with strategic positioning of certain titles and other flourishes. Maybe the odd copy of Ulysses could appear somewhere, split in two. If anyone asks, it was to allow the owner carry it around everywhere in his pocket.

Speaking of brush strokes, there is another irony in bookshelves’ sudden visual ubiquity during an age when physical books might have become superfluous. Which is that, in earlier eras, when they were more necessary, they were also invisible. No doubt readers will be able to point out examples I’m forgetting. But I cannot think of a single famous portrait in art history, from Rembrandt to Renoir, or from Dutch interiors to Dalí, which made bookshelves a backdrop.

Yes, occasionally there have been books placed on a desk or table, as in Van Gogh’s first painting of a depressed-looking Dr Gachet. But even then, in a second version, the books were eliminated, leaving only the doctor. Is it because visual artists are instinctively reluctant to promote a rival discipline? Or were bookshelves just too fussy a subject, requiring too much distracting detail?

That might explain the one instance I have found – and only because I went searching – of a full shelf-portrait in art. Its human subject was French novelist Edmond Duranty. The artist was Edgar Degas. And it wasn’t the first time Duranty had been on the receiving end of an Impressionist’s strokes, except that the previous occasion involved a sword – during a duel with Édouard Manet.

The Degas treatment was gentler, portraying him surrounded by books. But in keeping with Impressionism’s general approach, it didn’t bother with any fine print.

Like the fields and mountains of Cézanne’s landscapes, only smaller and more vertical, Duranty’s books are painted as just semi-abstract blocks of colour.

Diarmaid Ferriter: Farcical Covid strategy does not bode well for a ‘Shared Island’

1 Taoiseach says Government to weigh benefits of visitor restrictions when planning lockdown exit
2 BOI and AIB customers to face substantial hike in bank charges from today
3 Operator rejects claims by Dr Tony Holohan that car parks are full
4 Irish designer of Oxford vaccine : ‘I’ve never worked so hard in my life’
5 Somebody needs to explain sovereignty to Johnson before it is too late
Real news has value SUBSCRIBE