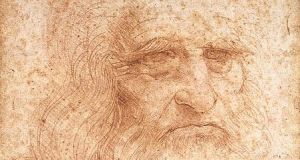 A drawing in red chalk widely accepted as a self-portrait of Leonardo da Vinci. Biblioteca Reale, Turin. Machiavelli collaborated with Leonardo on a plan to steal the river Arno from the Pisans, bringing them to their senses, or their knees, or both.

By the time he died, 500 years ago today, Leonardo da Vinci had long risen above the disadvantage of his illegitimate birth. His father was a wealthy legal notary, of high social standing. But his mother was a mere peasant, quickly discarded by the old man in favour of a more advantageous match.

Leonardo’s role in the patriarch’s household, where he grew up, would have something in common with one of his future masterpieces, The Last Supper. He had 12 half-siblings, all legitimate, from his father’s various marriages. They were all much younger than him too, by 40 years in one case. As in The Last Supper, none of the 12 would outshine the charismatic figure at their head.

After Leonardo’s death, one of his half-brothers, Bartolomeo, conducted an experiment aimed at reincarnating him. He sought out a young woman similar to the great genius’s mother, and from the same village.

Then he fathered a son by her, who was then raised in the same manner, including an apprenticeship in one of Florence’s best art studios.

Pierino da Vinci (1530-1553) had a lot to live up to and made a bright beginning at least. Some of his early work was good enough to be mistaken for Michelangelo’s. But despite having had a 55-year start in life, Michelangelo also outlasted him. Pierino caught malarial fever in Pisa and died, with all his youthful promise, aged 23.

As for Leonardo, he had been fated to live in the proverbial interesting times. This helps explain why, in a CV he once submitted to Ludovico Forza, the Duke of Milan, he first listed his skills in bridge-building, trench drainage, weapons manufacture, and many other disciplines useful to war, before adding a throwaway mention, down at bullet point 10, of his abilities to sculpt and paint “as well as any other”.

In the event, one of the works the Duke subsequently commissioned from him was what would have become the world’s largest equestrian statue. Although Leonardo produced a model of it in clay, there remained some doubt as to whether the bronze version would be too heavy for the horses’ legs – only two of which would be grounded.

But it never came to that anyway, because in keeping with the priorities of the time, the metal put aside for it was instead used to make guns, and the clay model later destroyed as target practice by invading French troops.

Leonardo’s contemporary and friend, Niccolò Machiavelli, would not have been surprised by such a turn of events. The man now seen as founder of modern political science considered war an inevitable part of statecraft, to be constantly prepared for and postponed only if it was advantageous to do so, or if its ends could be achieved by other means.

Hence his collaboration with Leonardo on what might have become the A-bomb of their time. The “A” in this case stood for the river Arno, which runs through both Florence, for whose rulers Machiavelli was working then, and Pisa, with which Florence was at odds.

The plan, essentially, was to steal the river from the Pisans, bringing them to their senses, or their knees, or both. With Machiavelli’s encouragement, Leonardo devised a scheme to reroute it, via tunnels and canals, so that it would bypass the enemy, and in the process give Florence a direct route to the sea.

It was a daunting task that would have tested Leonard’s hydraulic engineering skills. But like many construction projects before and since, the original design was compromised by corner-cutting. For that and other reasons, including attacks by the Pisans, the project became a debacle and was abandoned.

In time, even Machiavelli found himself on the wrong side of Italy’s shifting power balances. When the Medici family took control of Florence, he was accused of conspiracy and tortured via a method that involved suspension by the wrists, behind a prisoner’s back, until the shoulder joints dislocated.

Despite this, he recovered to live out his political retirement as a writer, pouring his knowledge into the works that made him famous, or infamous, including The Prince, one of whose metaphors is the “river of fortune” that runs through state affairs, and the “dikes and dams” that control it.

Compared with Leonardo, he may have been one of the lesser tributaries of the Arno-like flood of genius that ran through Renaissance Italy. But the pair also had a certain synchronicity in common. Some years younger than the man who died on this date, Machiavelli was born 550 years ago tomorrow.

1 Son putting elderly dad under pressure to sign over land
2 Covid-19: Museums, cinemas set to reopen next week as Varadkar warns of New Year restrictions
3 Stir-crazy Dutch holidaymakers set to descend on Caribbean island
4 Alison Curtis: My guilt at not going for a second pregnancy
5 Bloomberg ranks New Zealand top in fight against Covid-19 - but how did Ireland fare?
Real news has value SUBSCRIBE