Coronavirus curve-ball: Frank McNally on a bad year for forecasters 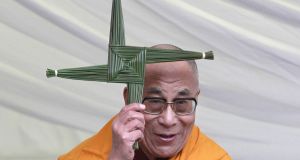 If the Dalai Lama was not in a high-risk group at Christmas, he is now. Above, the Dalai Lama in Kildare in 2011. Photograph: Brenda Fitzsimons/THE IRISH TIMES

In an idle moment the other day, I dug out my copy of the Economist’s The World in 2020. This was the latest instalment of an annual, published around Christmas, in which the magazine looks forward to the New Year and attempts to forecast what it will bring.

It’s always a stylish, engaging read, and its guesses about the future are as good as most, usually.  But the perverse entertainment of re-reading the 2020 issue now, barely three months on, shows how spectacularly wrong everything was.

The magazine did, in fairness, foresee worrying news from China, which it warned would be a source of “unpredictable risks and threat”.  That was a safe enough bet – a bit like a racing tipster foreseeing that something with four legs would win the Aintree Grand National (not that that happened this year either).

But even then, it was from the Chinese “periphery” (Hong Kong, Taiwan, the Uighirs) that danger was expected, not the heartland where, as we now, the real trouble lurked.

Alongside this, however, was the little sidebar: one of a series of stabs in the dark that the annual also features, under the headline “What if?”. This is like the racing tipster recommending a modest side-bet at long odds on a horse that runs like treacle, but will do so all day, so that if every other horse falls, it might sneak into the places.

In that vein, the Economist wondered what would happen if the Dalai Lama, 85 this year and in fragile health, were to die.

Both China and India could expect “unrest”, it suggested.  Part of India’s north-eastern frontier, bordering Tibet and claimed by China, would be a flashpoint. “Tibetan exiles may be tempted to look [there] for the Dalai Lama’s reincarnation”, while China would be eager “to find a reincarnation of their own”.

This may have been as near the truth of 2020 so far as the annual got.  If the Dalai Lama was not in a high-risk group at Christmas, he is now. I see that from his exile on India’s north-western frontier, Dharamsala, last week, he issued a statement thanking his host country for its efforts against coronavirus.  But insofar as it’s ever possible in that country, I hope he’s well isolated. *** * Having been to Dharamsala myself once, I have an embarrassing insight into the unique challenge social distancing in India presents.  It was in 1996, on a delayed honeymoon, and Dharamsala hadn’t been part of the plan.

But after three days in the heat and crowds of Delhi, my wife and I had to flee for the mountains: first via an overnight train to the Himalayan foothills, then continuing by bus.

I’ve never been the best of bus travellers, especially on bad roads.  In the years before the M1, the 90-minute journey from home to Dublin used to leave me nauseous. One I had to get off early and hitch the rest of the way. But leaving Delhi that morning, my stomach was already delicate.

The window seat was cramped and claustrophobic, even before the aisles filled up, cutting off escape. Thus we set off on a four-hour journey of a hundred bends and a thousand gear changes. An hour later, I knew I would be throwing up imminently. But to do so, I would have to get my head out the (small) window. And being six feet tall, I couldn’t physically do this, sitting or standing, from where I was.

So I had to change places with my wife, then lean across her from the aisle seat to throw up, with the bus looking on.  This happened several times throughout a mortifying journey, so that my dignity had long gone the way of breakfast by the end.  Still, it could have been worse.  It could have been a week later, when the digestive issues had travelled south.

Among the 10,000 Tibetans in Dharamsala, we also met a young American couple: serious travellers who had already spent 14 months trekking through Asia. Like us, they had just arrived in India, via Pakistan. Unlike us, they had planned every detail of their trip.

In fact, they were already planning the next one, which would last the rest of their lives.  The idea was that they would first return to the US, work a few more years, before retiring in their 30s.

They would invest in hedge funds, then travel indefinitely, again mostly in Asia, where they could live on a dollar a day.  It was an impressive plan, meticulously thought through.  Alas, I don’t think it quite worked out, thanks to complications arising from a thing called 9/11.