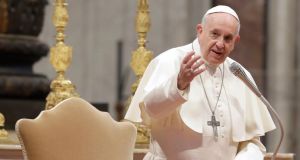 On the December 17th last the Vatican announced that the “pontifical secret” would no longer be applied to canon law trials involving clerical sexual offences. Many people were unaware of this “secret” but survivors of abuse have campaigned for its removal for many years.

What is the “pontifical secret” and what change should its removal bring in the handling of sexual abuse by the Catholic Church?

While pontifical secrecy goes back centuries it was named and defined clearly in 1974 when Pope Paul VI issued a canonical instruction Secreta Continere – De Secreto Pontifico.

It stated that those bound by the pontifical secret could “in no way, under any pretext, whether of greater good, or of very urgent or very grave reason” break the secret. Only the pope or someone directed by him can dispense from the pontifical secret. The punishment for breaking the secret can be very severe, going as far as excommunication.

The pontifical secret was intended originally to cover sensitive governance information in the church. Members of the curia and those appointed to the post of nuncio take the oath at the beginning of their service.

Among other things, the secret covers the process of choosing new bishops, financial records, draft laws, serious penal processes undertaken by the Congregation on the Doctrine of the Faith and, until now, matters involving clerical sexual abuse.

While pontifical secrecy is the highest and most restrictive level of confidentiality in the church there is also a lesser level “secret of office” which covers everything else.

In 2003 a church document, Crimen Sollicititationis, from 1962, was made public by CBS television in the United States. It dealt with secrecy around clerical sexual misconduct.

This document was interpreted by many at that time as the “smoking gun” showing cover-up of sexual abuse cases was an official church practice, which was denied.

While I was a member of Pope Francis’s Pontifical Commission for the Protection of Minors (PCPM) it examined the pontifical secret, particularly in the context of the rights of victims of abuse.

The commission found that the effect of the pontifical secret on the victim in canon law abuse trials was to deny them rights which would be the norm in secular criminal law trials.

This included no right to access the case file, even documents written about them or claims made by the accused in his defence during the preliminary investigation. It meant the victim had no way to provide evidence countering any factual inaccuracies. In some cases victims themselves were sworn to secrecy.

The negative effect of the pontifical secret on co-operation with civil authorities was also significant. We have seen in Ireland that when the Murphy commission requested files from the Vatican to assist in their work these were not forthcoming.

Similarly last year the Independent Inquiry into Child Sexual Abuse in the UK was also denied files by the Vatican. At another level, bishops have used the excuse of the strict level of confidentiality to refuse to share information with civil authorities.

In September 2017 the PCPM made a formal recommendation to Pope Francis that the secret be removed from canonical processes where sexual crimes were concerned.

Nothing was heard until February of last year when the bishops of the world met in Rome. There two prominent cardinals, Marx of Munich and Cupich of Chicago, called for its removal.

In an interview at the time Ireland’s Catholic Primate Archbishop Eamon Martin said secrecy had to go, as “secrecy has been one of the root causes of the problem we are in today” . . . “my files have to be open”.

Since then Archbishop Charles Scicluna of Malta and Cardinal Cupich have continued to work on this issue, culminating in the pope’s announcement last December.

The removal of the pontifical secret from canon law trials of a sexual nature brings a balance of rights to the victim and allows files and information to be shared with civil authorities. It should also facilitate more sharing of preventative information between ecclesiastical bodies.

While this should be a concrete step forward for justice there may be problems. Many within the Vatican do not approve of the change. The secret of the office level of confidentiality will still apply. Their interpretation of this will be crucial, particularly in regard to co-operating with civil authorities.

This action by Pope Francis has opened the way to a new era of transparency. However, old habits die hard so it is a case of wait and see.