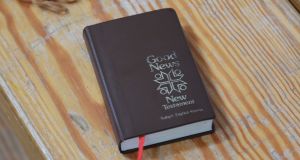 The Electoral Act obliges those who are challenged while voting to swear on a Bible or publicly refuse to do so. Photograph: Nick Bradshaw

In Ireland high public office is only for the religious, and our court system ignores the rights of atheists, despite the fact that we pride ourselves on our human rights record and promote freedom of religion and belief around the world.

I recently had to make an affidavit, and the solicitor asked me which religious book I wanted. I had to tell her, in a public office, that I did not want any religious book as I was an atheist.

I was annoyed and she was embarrassed when I told her that she was breaching my right to freedom of religion and belief, by putting me in a position where I had to declare my atheism.

Thankfully this particular problem is about to end. The Civil Law and Criminal Law (Miscellaneous Provisions) Bill 2020 will allow us to make affidavits without revealing our personal beliefs.

But this only a half step towards removing all religious oaths from State activities. Witnesses in court must still swear on the Bible or publicly refuse to do so. As well as having their rights breached, they could also be victims of bias.

This discrimination is so widespread that it goes unnoticed. The Electoral Act obliges those who are challenged while voting to swear on a Bible or publicly refuse to do so. It also spreads beyond individual incidents into affecting the careers of public office holders.

Imagine the outcry if any public office holder had to swear that there was no god?

Eamon Gilmore became tánaiste in 2011. Despite being on record as not believing in a god, he had to swear a religious oath against his conscience or resign. As tánaiste he was constitutionally obliged to be a member of the Council of State, and to swear this religious oath.

The taoiseach, tánaiste, chair of the Dáil and Seanad, and attorney general, are all members of the Council of State. This means that a conscientious atheist cannot take these positions. Judges and the president are also constitutionally obliged to swear a religious oath.

Imagine the outcry if any public office holder had to swear that there was no god? Everybody would realise that this would be a breach of their rights. But there is a blind spot when the discrimination is the other way around.

Atheist Ireland has raised this issue at the United Nations Human Rights Committee. The UN has asked Ireland to hold a referendum. But our State delegation never responds to the UN about this, and the recent programme for government includes no commitment.

The European Court of Human Rights has consistently found that the right to freedom of religion and belief is one of the foundations of a democratic society. The court has also held that the right to manifest your religion or belief has a negative aspect.

This means that the State cannot oblige you to disclose your religion or beliefs. Nor can it oblige you to act in such a way that it is possible to conclude that you hold, or do not hold, religious beliefs. That is intervening in the sphere of your freedom of conscience.

The last census showed one in 10 Irish people had no religious beliefs. And that was despite a leading question that artificially increased the number of religious people. Why do our politicians not care about protecting the rights of this substantial minority?

There is no need for an oath in court. The judge should just tell people that they are legally obliged to tell the truth, and that it is a criminal offence to not do so. The law should deal with the consequences of our actions, not our beliefs about supernaturalism.

Public office holders should make a declaration that they will impartially uphold the law, without revealing anything about their personal beliefs. Some citizens are taking this issue to the European Court, but we should fix the problem before being forced to do so.

Atheist Ireland has campaigned for a decade to end these discriminatory oaths. It is fundamental to democracy that all citizens are treated equally regardless of our religious or non-religious beliefs. The ending of religious oaths for affidavits is a welcome half-step in that direction.

1 Ireland should allow controlled spread of Covid-19 among under-60s, Swedish expert to tell committee
2 Ireland’s top earners ‘do not see themselves as rich’, study finds
3 Air travel never going ‘back to way it was’
4 Miriam Lord: Let’s call a spad a spad – this Government has woeful timing
5 What is wokefishing, the latest online dating deception?
Real news has value SUBSCRIBE