Brat’s tale: Frank McNally on the curious evolution of the Irish word for ‘flag’

How ‘brat’ worked its way down in the world 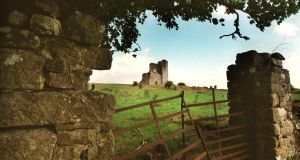 English poet Edmund Spenser moved to Ireland on an ill-fated attempt to benefit from the plantation of Munster. Above,  Kilcolman Castle, Co Cork, where he lived. Photograph: Bryan O’Brien

In Irish, as you probably know, “brat” means “flag”. In English, it means “an unruly child”. The two concepts would not appear to have much in common, except perhaps at certain bonfires in Northern Ireland around this time of year, when brats of both kinds can be implicitly present: burning or being burned.

But the connection may be more umbilical than that, it seems. Because as Patrick Dinneen’s famously inclusive Foclóir Gaedhilge agus Béarla points out, “brat” also refers to a range of textiles, including “a cloak, a mantle, a garment, a cloth, a banner, a shroud, a covering of any kind”. And it appears to be via one of these that the two-legged, misbehaving “brat” entered English.

The theory is mentioned in an epic and fascinating podcast on the History of English by Kevin Stroud, which I chanced upon recently. In an episode on the influence of Celtic languages on the Anglo-Saxons, he suggests that only about “a dozen or two” words from the former were adopted by the latter, of which the Old Irish “bratt” may  – it is still disputed – be one.

If so, it evolved over the centuries, first from a term meaning “cloak” in general, to “beggar’s cloak” in particular. Then it became “beggar’s child”, without any imputations of bad behaviour, before finally taking on the derogatory sense it has now. This was well established by the time of Samuel Johnson’s 1755 dictionary, which defined “brat” as a “child, so called in contempt”.

A logical offshoot was “brattery” which, circa 1788, was used as slang for “nursery”.  Alas, that seems to have disappeared from English since.  We could do with reviving it now occasionally, if only to describe such kindergartens as 1980s Hollywood, some of whose brash young stars became known as the “Brat Pack”.

There is at least one alternative theory for the English brat’s origin: entertaining but probably wrong. It comes from Germany, which typically has the best word for annoying children (especially other people’s). “Satansbraten”, they call them there, meaning literally “satan’s roast”.

But however apt that might seem, it is undermined as a root of the English brat by the fact that the latter only became an insult in later centuries, having spent a long period as a term so benign that even an affectionate parent could use it, as in a 1582 translation of Virgil, where Trojan hero Aeneas is referred to as a “brat” by his father.

In a separate development of the 1580s, by the way, the English poet Edmund Spenser moved to Ireland on an ill-fated attempt to benefit from the plantation of Munster.   And among his writings here, he included a tirade against what was the defining item of Ireland’s national dress-code then: the mantle or brat, an all-weather garment worn by men and women alike.

To Spenser, it covered a multitude of sins. Worn by Irish men, he suggested, “it is a fit house for an outlaw, a meet bed for a rebel, and apt cloak for a thief”.  Worn by a woman, its uses included being “a coverlet for her lewd exercise.”

That meant sex, clearly, because by his next sentence, the woman is pregnant, something the mantle also allows her to hide. It’s still a century too early for Spenser to work the word “brat” in here as a double entendre.  But in his continued rant against the garment, he gets unwittingly close: “[. . .] and when her bastard is born, it serves instead of swaddling clouts [clothes].”

Three centuries and more later, in Terry Dolan’s Dictionary of Hiberno-English, “brat” is still listed both in its older meanings of “cloak; apron (from Antrim) and “covering, mantle, robe” (Kerry), as well as the modern sense of “you little brat”.

Central to the move from one to the other seems to have been the raggedness of clothes, especially as worn by the poor.  Although Dolan suggests it is of “origin obscure”, he notes that in Middle English, “bratt” meant “coarse mantle”, or “rag”.

Given the excessive protocol surrounding national flags – one must never let them touch the ground, for example, or fly them after sunset without floodlighting – the various meanings of Irish brat might seem a diplomatic incident in the making. But for its ragged connotations, at least, there is a respectable precedent.

The world’s oldest continually used national flag, now aged 801, is Denmark’s.  It is said to have been sent by God during a battle against the Estonians in June 1219. The Danish crusaders were facing defeat until a red banner with a white cross descended from the sky and inspired them. The flag is known as the Dannebrog, or “red rag”.