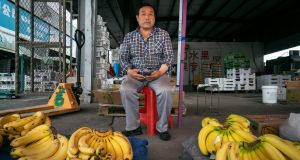 A fruit vendor at a wholesale market in Xuzhou, China: Donald Trump began his othering campaign with Covid-19 as a Chinese disease. It was taken on board by his China hawks. Photograph: Giulia Marchi/New York Times

Donald Trump’s re-election strategy hinges on an “othering” of the Black Lives Matter movement as anarchist enemies to be defeated by federal paramilitaries. It also depends on an external othering of China in a new cold war.

Othering constructs a negative and repulsive image of an antagonist as fundamentally different or alien; the better to fashion a positive and attractive image of the yourself or your group. The term is widely used to analyse imperial, colonial, racist and sexist stereotypes in justifying hierarchies of conquest and power.

Trump has mastered rhetorical and performative abuse of his antagonists on Twitter and other media to bolster his own political base in Republican white society. Despite setbacks in the polls during the Covid-19 crisis, shrewder observers say there is time for him to recover by exploiting weaknesses in Joe Biden’s Democratic campaign.

As before, Trump devotes great attention to maintaining his base. Othering Black Lives Matter and China serves that purpose well. He expects their mistakes in response to his stereotyping will more than compensate for its crudity.

Trump’s use of militarised border guards reveals how determined his electoral strategy has become. His 2016 campaign relied centrally on constructing borders and walls against Hispanic immigration from Mexico as well as on Islamophobic opposition to Muslim immigrants.

The force was built up since 2006 from 5,000 to 20,000, its budget tripled, while its internal racist and anti-immigrant culture is strongly supported by and in turn supports Trump.

Its elite tactical force was deployed alongside Homeland Security and other federal forces in Portland Oregon as an exemplary action against “anarchist forces” behind the Black Lives Matter protests. By orchestrating this story performatively with Fox television he hopes to convince suburban whites they must vote for him despite the Covid failures. The strategy is suffused with racist othering and the politics of fear.

Trump’s dealings with China since 2016 began transactionally in the politics of trade bargaining as he insisted on a more evenly balanced account between the two superpowers. Compared to US relations with the Soviet Union during their cold war from the 1950s to the 1980s, its links to China are far more interdependent economically.

Huge outsourcing of US manufacturing there in the 1990s and 2000s means the bargaining between them is much more evenly balanced. It is also non-ideological, since Chinese state capitalism, although it is run by authoritarian communists, participates fully in the world of capital and does not demand its overthrow.

Even until the beginning of this year it was unclear whether the US and China could resolve their differences in negotiations rather than shift to a more qualitatively hostile condition. Trump is acutely aware his political base can be affected by the change in the course of this year. He began his othering campaign with Covid-19 as a Chinese disease.

It was taken on board by his administration’s China hawks, including notably now secretary of state Mike Pompeo. They have transformed his rhetoric into a more comprehensive ideological othering of China as communist enemies of American freedoms – going beyond Trump’s more pragmatic approach.

His willingness to go along with that shift is designed to take the Democrats off guard. Their policies – and many of his – display continuity with Obama’s pivot to Asia as China’s power burgeoned during the 2008 financial crisis. His willingness to deal with Xi Xinping has given way to a growing realisation that China is a major emergent competitor power.

It is a structural conflict rather than one that can be easily resolved by changes of policy. The more assertive and aggressive Chinese policies in the South China Sea, in Hong Kong, India and with the Uighers this year tipped the balance towards the US hawks.

Their polarisation of the conflict into a new cold war may suit them electorally but is dangerous militarily. It poses real dilemmas for other powers in the Asian region much more interdependent economically and politically with China. India is pushed more in the US direction in security terms, Japan still has a huge economic stake in China, while the 10 Asean states in southeast Asia struggle to maintain their autonomy from a new cold war bipolar confrontation.

A great uncertainty is whether this othering strategy will secure Trump his victory. Biden would continue a lot of his new and more determined US-China policy, perhaps short of a cold war. Internally, he would de-escalate Trump’s culture wars. That would be a major achievement.

1 ‘I wandered around Dublin wondering: Is this what they call a capital city?’
2 Coronavirus: 50 new cases and no further deaths reported in the State
3 Fresh investigation into the murder of Michaela McAreavey in Mauritius
4 Funeral of John Hume hears peacemaker ‘gave dignity and life to so many people’
5 Irish in Canary Islands: Life has changed dramatically
Real news has value SUBSCRIBE