The normal scale: From normality to normalcy to normalness

All the president’s words: How a US president pushed the boundaries 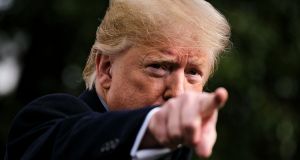 Not even President “Bigly” Trump has ever said “normalness”, to the best of my knowledge, although it’s just the sort of word he could make a virtue of resurrecting. Photograph: TJ Kirkpatrick/The New York Times

As I now know, the word has been controversial in the US too, historically. Speaking of politics, it was briefly a presidential election issue back in 1920, when featuring in the manifesto of republican candidate Warren Harding. He too wanted a return to it, after the war.

Hence his campaign mantra (which was big on alliterative couplets): “America’s present need is not for heroics, but healing; not nostrums, but normalcy; not revolution but restoration; not agitation but adjustment; not surgery, but serenity; not the dramatic, but the dispassionate; not experiment, but equipoise . . .” And so on.

Not even President 'Bigly' Trump has ever said 'normalness', to the best of my knowledge, although it’s just the sort of word he could make a virtue of resurrecting

We might pause to reflect on how far US political rhetoric has fallen since the days when a Republican presidential candidate could use the word “equipoise”, more or less correctly, in a sentence. In any event, it was Harding’s “normalcy” that commentators questioned, because “normality” was considered the norm then, even in the US.

Many people assumed he had just made the word up. He hadn’t. It had been appearing in print since the mid-19th century. And when the candidate defended the usage mid-campaign, he claimed that not only was it in his dictionary, but that “normality” was not.

Harding survived the controversy to win a landslide victory. Alas, he died in office. Alas too, although he enjoyed high popularity ratings, he was posthumously the subject of a series of scandals. Thus, in scholarly ratings of US presidents, he is usually ranked around 40th, among the very worst (although the current one is so far threatening to push him up a notch).

In this context – and Harding’s use of “equipoise” notwithstanding – it should also be said that he was part of the inspiration for a now notorious prediction by the writer HL Mencken, who in 1920, lamenting not just the quality of both candidates, but also of the voters, wrote this: “The Presidency tends, year by year, to go to such men. As democracy is perfected, the office represents, more and more closely, the inner soul of the people. We move toward a lofty ideal. On some great and glorious day, the plain folks of the land will reach their heart’s desire at last, and the White House will be adorned by a downright moron.”

So much for getting back to normalcy, or even normality, now. But getting back to the words, at least, I note from Fowler’s Dictionary of Modern English Usage that “normal” itself hasn’t always been normal, in the sense we know it today: “regular, usual, typical, etc”.

It had previously meant “rectangular”, and still does, alongside its vaguer modern sense, which dates from only about 1840. It was around then too that the related nouns began appearing, and there were three of these at the start, not two.

Along with normality and normalcy, you could also have said “normalness” then. And why not? But mysteriously, as Fowler writes, that one “has hardly taken on at all”.

Not even President “Bigly” Trump has ever said “normalness”, to the best of my knowledge, although it’s just the sort of word he could make a virtue of resurrecting. Proving the point, here, from 2017, is one of his cheerleaders criticising the early backlash to Trump’s election as follows:

“For the past five months The Left and their Media Fluffers [. . .] have been colluding and Russia-gating and obstructing All Things Normal – which is what Trump was elected to champion. Good old-fashioned American normalness.”

That “Russia-gating” brings us to one of the posthumous disgraces of Harding’s presidency: the so-called “Teapot Dome Scandal”. Named after a rock formation in Wyoming, this involved largescale bribery by oil companies seeking control of government reserves near that site. It was considered the greatest political scandal in US history until ousted by Watergate.

The latter’s lingering infamy has led to a disease of the English language whereby every scandal ever since has been guaranteed to have the suffix “gate” attached. “Dome” would be an improvement in at least a few cases, I suggest. The aforementioned one, for example. Invoking images of St Basil’s Cathedral, “Russia-doming” has a certain ring to it.